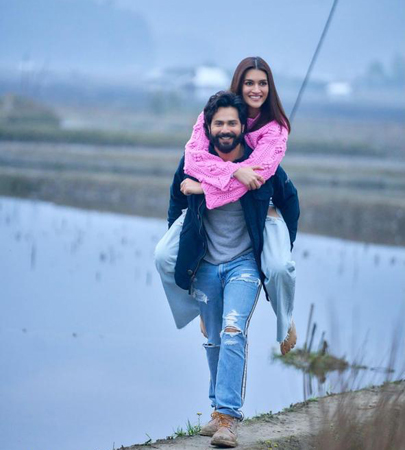 Kriti Sanon on Monday posted a heart-warming message for her Bhediya co-star Varun Dhawan as she wrapped up her schedule on the upcoming horror-comedy.

Kriti wrote about the long-standing friendship she shares with Varun since they first starred together in Rohit Shetty’s 2015 action drama Dilwale.

“And its a schedule wrap for me in Ziro for #BHEDIYA! From Dilwale to Bhediya and all the years of friendship in between, we’ve come a long way @varundvn… Gonna miss you, the captain of our pack @amarkaushik and the entire Wolfpack See you guys soon!! And bye bye Ziro!” Kriti wrote alongside two photos of herself with Varun. The Bhediya team had been shooting in Ziro, Arunachal Pradesh, for some time now. An hour before Kriti shared her feelings on completing her schedule, Varun took to Instagram to write that he would miss both his co-star and their stunning shooting location.

Varun Dhawan and Kriti Sanon have reunited for Bhediya six years after Rohit Shetty’s action drama Dilwale. Bhediya, backed by Dinesh Vijan, also stars Abhishek Banerjee. The film is the third part of producer Vijan’s horror-comedy franchise that includes the 2018 hit Stree and the latest Janhvi Kapoor-Rajkummar Rao starrer Roohi. Bhediya will arrive in cinema halls on April 14, 2022. Varun Dhawan’s first in the genre, Bhediya will be high in VFX and prosthetics.

The actor shared on Instagram story a video of himself bidding bye to the same girl child he earlier posted a video of where he was seen feeding a piece of cake to her father instead of the toddler who was patiently waiting for a bite. Another Instagram story of Varun featured him with Kriti and a crew member, which the actor captioned, writing, “Bye bye Ziro. We are not wearing masks since there are zero cases in Ziro (sic).”