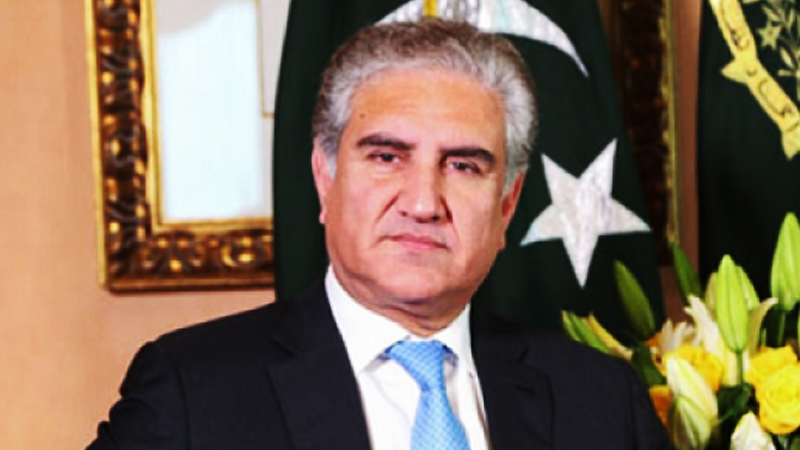 Minister for Foreign Affairs Shah Mehmood Qureshi on Sunday said his visit to United Arab Emirates would strengthen existing bilateral ties of both the countries.

Speaking at a press conference here, he said that he would hold a meeting with the Foreign Minister of UAE (United Arab Emirates) on Monday.

He clarified that he had no meeting scheduled with the Foreign Minister of India Jaishankar.

He said a mega event would be organised by Pakistan in Sharjah in October this year to showcase the hidden treasures of Pakistan.

At the event, professionals among the Pakistani community in UAE would be invited, he said.

The event would highlight the role played by the Pakistani community in the progress and prosperity of UAE, he said adding, he would invite Prime Minister Imran Khan to the mega event.

Both the countries were making an effort to organise different programmes at the completion of the 50 years of brotherly diplomatic relations, he informed.

He said that he visited the venue of expo 2020 and was impressed with the facilities offered there.

The events at expo 2020 would coincide with the National Day of the United Arab Emirates, he said.

He said the government wanted to give the right to vote to the overseas Pakistanis and it was consulting with other political parties on the issue.

“We want that overseas Pakistanis should have a role in Pakistani politics and policy making.”

The foreign minister said both India and Pakistan would have to think about their bilateral ties.

Pakistan never evaded talks and wanted to live in peace with all its neighbours including India, he stressed.

The foreign minister said Pakistan was ready to talk with India if it took back its steps of August 5, adding, Pakistan could not ignore the Kashmir issue.

The Foreign Minister said he had telephonic contact with the Afghan Foreign Minister, adding the Afghan peace process had entered an important stage and a number of countries were making efforts for securing peace in Afghanistan and in this regard Turkey will also hold a conference and it will be our wish that Taliban should attend the talks.

All stakeholders related to the Afghan issue should work together to decide the future of Afghanistan, he opined.

Qureshi said Pakistan would continue to play a positive conciliatory role as a facilitator in the Afghan peace process.

He said in his talks with the Afghan Foreign Minister, they discussed the situation arising after the announcement about the United States troops withdrawal from Afghanistan.

Iran was a neighbour of Afghanistan and had an interest in the Afghan peace process and it will state its position during the conference, he noted.

The minister said positive efforts were made to resolve issues between countries of the Gulf Cooperation Council and now the situation was improving.

During his visit in December last year, in his meeting with UAE foreign minister he raised the issue of difficulties faced by Pakistanis in getting visas and now the situation was better for getting family visas, he observed.

To a question, the minister clarified that there was no formal back channel contact between Pakistan and India.

There was no need for a back channel and India should come to the negotiating table and discuss the issues of Kashmir, Sir Creek and water, he added.

He emphasized that India should stop oppressing Kashmiris before coming to the table for talks.

He stated that overseas Pakistanis were a great asset for the country as they send their hard earned money back home and help keep the national economy stable.

He said after assuming the charge of ministry of foreign affairs he instructed all the embassies to show good attitude to the overseas Pakistanis community.

During the coronavirus pandemic, the consulate in Dubai performed well, he added. “If we receive any complaint we will investigate the matter and fix responsibility.”

Qureshi pointed out that in the last two and a half years India failed in its attempts to isolate Pakistan at the international level.

When prime minister Imran Khan went to the United States he was given a very warm welcome and on his arrival in New York thousands of people gathered outside the United Nations building, he continued.

He said Pakistan improved its ties with the European Union and the Islamic countries.

He said Pakistan desired peace in the region as with peace the economy will begin to improve and more economic opportunities will be created.

Qureshi said the coronavirus pandemic badly affected the world and a huge number of people lost their jobs.

Pakistan came up with a better strategy with its limited resources to save lives and jobs, he said adding, “In the first stage we are vaccinating our healthcare workers to protect them from coronavirus while remaining people will be given the vaccine in different stages.”

He thanked China for sending the gift of the Sinopharm vaccine to Pakistan.

The well to do people could buy the vaccine privately, he informed.

He said Pakistan had been hosting the Afghan refugees for the last four decades but it was unfortunate that the international community failed to focus on the issue.