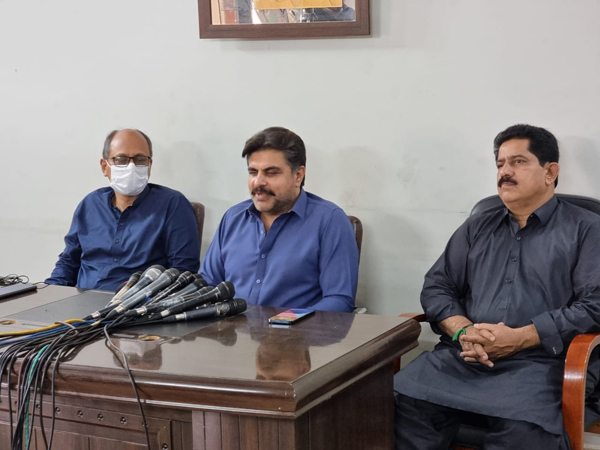 Sindh Minister for Information and Local Government Syed Nasir Hussain Shah has termed Sindh development package announced by prime minister the other day in Sukkur as an eye wash and added all the projects were already included in federal budget which were delayed due to non allocation of funds.

The Minister added that Sukkur –Hyderabad Motorways Project was conceived under CPEC in previous government tenure, Gaaj Dam project was launched in 2013 while schemes of up-gradation of passport offices and railway stations in Sindh were already included in federal budget book.

Responding to a query on Islands, the Provincial Minister stated that all the development on the twin islands would be made with consent of local communities including fishermen. The Sindh government has mentioned it in a letter written to the federal government but they had promulgated presidential ordinance and made the issue controversial. The ordinance for creation of the Island Development Authority was ill intended and the federal government wanted to make the island a federal territory.

To another question, recruitments through Sindh Public Service Commission were made on merit. Pakistan Peoples Party’s Sindh government never believed in linguistic ideology. We have great respect for Urdu speaking community. He added that Sindh chief minister had taken action whenever complaints were raised on the process of recruitment through Sindh Public Service Commission. Sindh government has spent billions of rupees on the development in those areas also where PPP has lost in elections. He said those people were raising objections to the results of SPSC , who had advised people of Karachi and Hyderabad to buy arms by selling tv sets. Their (MQM) politics is based on playing with the emotions of the people. Provincial Minister Syed Nasir Hussain Shah said that PPP has always persuaded a policy of reconciliation. But we have faced politics of hypocrisy.

The provincial minister said that the government’s responsibility is to build national assets and protect them but everyone knows what the present federal government has done to the national assets. What they have done with SBP and with the steel mills.

On the reshuffle in federal cabinet, Syed Nasir Hussain Shah said that Shoukat Tareen induction in the incompetent PTI cabinet could not make any difference or improve the economy of country.