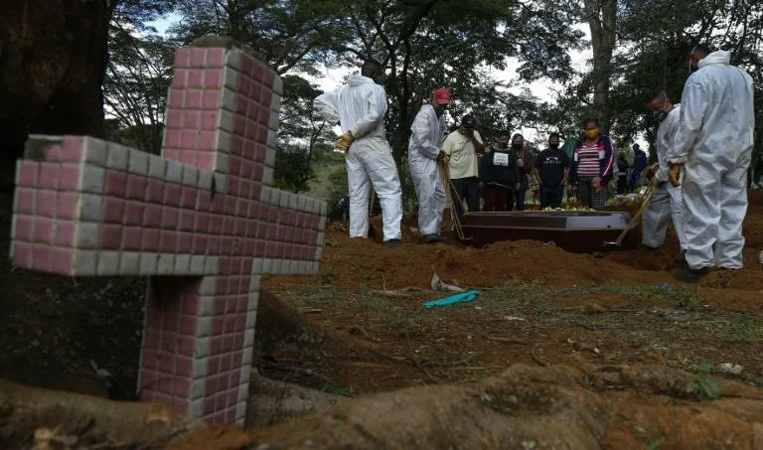 But since the second wave of the coronavirus pandemic swept across Brazil, that exception has become the rule.

The vertiginous rise in deaths in Sao Paulo in recent months has forced the mayor of the country’s richest and most populous city to adapt funeral planning to avoid being overwhelmed.

Now, in addition to hiring more personnel and vehicles, night shifts have been added in four of the 22 municipal cemeteries, where 600 graves are dug every day.

One of these is Vila Formosa, the largest cemetery in Latin America and a showcase for the lethal cost of the pandemic in Brazil, where more than 360,000 people have already died from Covid-19.

At 6 pm the night shift clocks in. Two huge lamps powered by generators start up, illuminating the graves and filling the air with the smell of diesel.

It is the start of autumn here, and in this tree-lined cemetery on the outskirts of Sao Paulo the temperature has dropped to around 16 degrees Celsius (60 degrees Fahrenheit).

Eight gravediggers clad in white overalls, face masks and gloves arrive in two vans. They get out and form a circle around the graves, hands behind their backs and heads bowed to observe a minute of silence.

Then, they fetch their shovels and lay to rest the first deceased of the night.

“Are there no relatives?” asks one.

“No. You can go ahead,” answers another, clutching the deceased’s documents in his hand.

In May 2020, during the first onslaught of the pandemic, the cemetery hired three excavators to dig 60 graves a day. Now, there are six machines digging 200 graves a day, say the workers, who labor until 10 pm.

Fifty rented vans are used to move bodies, due to a lack of hearses to cope with the influx of dead. The mayor’s office has denied local media reports that school buses have been pressed into service.

More than 300 burials a day

Shortly after, a van arrives with another casket. A large group of relatives surrounds the grave where the 57-year-old man, who died of Covid-19, is to be buried. The dead man’s sons ask if they can place a yellow and green shirt from the Brazilian soccer team on top of the coffin.

The gravedigger who is holding the burial documents nods his assent. “It’s the only thing we can do,” he says.

Four men start shovelling reddish earth on to the coffin. In seconds, it is covered.

Howls of anguish mingle with the grating of shovels and the hum of generators.

By now accustomed to the presence of journalists and photographers, the gravediggers chat but ask not to be identified.

Almost all are vaccinated, and say the pandemic was worse for people in funeral homes than for people like them who work outdoors.

“I want this to end quickly, because it is very sad. We try not to get upset in our work, but it is sad, it is a lot of people, and a long time,” says one of the gravediggers, peeling off his green gloves at the end of his shift.

Vila Formosa is the final resting place of 1.5 million people. In March it peaked at 105 burials in a single day, three times the pre-pandemic average.