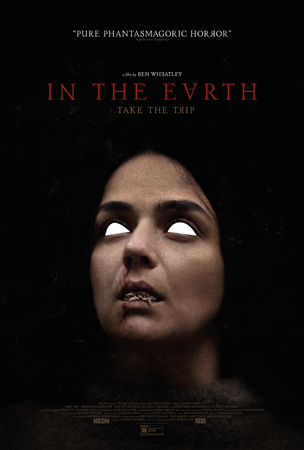 For all our modern technological advancements, two sobering realities remain true: People go missing every day and some corners of our world remain completely unexplored.

Both facts are mysteries, and sources of fear. Where do people disappear to and are they always the victim of mundane violence? What’s hiding in the oceans, jungles, and other locales so impenetrable that they reject humanity’s presence?

Filmmaker Ben Wheatley combines these anxieties in his latest horror movie, In the Earth. Written and directed by Wheatley during the COVID-19 pandemic, In the Earth is explicitly informed by the last year of our collective lives. The film’s sparse script builds an image of self-isolation, government failure, and widespread loss, while the characters’ decision-making is shaped by an initial sense of wariness toward strangers, then a headfirst rushing into camaraderie and trust. The latter often isn’t the right choice, but don’t most people want to believe other humans are inherently good? Wheatley scoffs at the idea of innate altruism, and also questions the distinction between mythology and science. In the Earth is an immersive portrait of tribalism and madness, angst and survivalism. And in spite of the somewhat predictable narrative, the film builds to an unshakably tense, unsettlingly eerie conclusion.

In the Earth begins with an act of destruction deep inside a verdant forest, a sequence that serves as a subtle nod to Stanley Kubrick’s science fiction classic 2001: A Space Odyssey. After the violent opening, the film moves to the UK’s Gantalow Lodge research site, where scientist Dr Martin Lowery has just arrived. Martin has been isolated for months due to an unnamed pandemic sweeping his world, and he seems almost desperate to connect with new people. But most of the scientists are in the field, and the lodge is disquietingly quiet.

In the Earth begins with an act of destruction deep inside a verdant forest, a sequence that serves as a subtle nod to Stanley Kubrick’s science fiction classic 2001: A Space Odyssey. After the violent opening, the film moves to the UK’s Gantalow Lodge research site, where scientist Dr Martin Lowery has just arrived

The only people Martin spends time with are Frank, the doctor who inspects him for symptoms of the spreading illness, and Alma, the park ranger assigned to guide him into the forest to meet fellow scientist Dr Olivia Wendle. Dr Wendle, who is researching ways to make crop growth more efficient, is well-known for her theory that all the trees in a forest are connected, like one gigantic brain.

Martin clearly has a complicated personal past with Dr Wendle, but her affection for the forest seems to have rubbed off on him. When Frank warns him that the forest is a “hostile environment” he shouldn’t underestimate, a place where people have gotten lost and died, Fry’s quietly bemused, slightly dismissive “OK” is a sign that Wheatley’s grim sense of humour, sharpened in his previous films High-Rise and Free Fire, remains intact.

Could anything have dissuaded Martin from his two-day trek through the forest to meet Olivia? It doesn’t seem so. Frank’s warning doesn’t discourage him. Neither does Alma’s explanation of a foreboding tapestry that depicts Parnag Fegg, the “Spirit of the Woods,” a local folk tale who has terrified children for decades. The imagery of Parnag Fegg includes skeletons, headless and blinded figures, floating children, imps and demons and a hooded figure wearing a crown of sticks, but none of that deters Martin. The forest is “something that you can sense,” Alma says, which raises questions: What has Alma felt in the woods before? What is Martin feeling that’s drawing him there? And what about Olivia, who spent months in the woods and whose abrupt cease in communications with Martin partially inspired his decision to find her?

In the Earth becomes a sort of road movie as the capable Alma guides Martin through landscapes both barren and dense. They walk in the sunshine through fields of flowers, duck under densely grown tree boughs, and pass by purple mushrooms emitting little puffs of spores, to a soundtrack that sounds like Gregorian chants. The all-business Alma is at first patient with Martin, then increasingly irritated by his shortcomings and perhaps his mistruths; Torchia memorably flexes her face into a wide range of exasperated reactions.

Martin, meanwhile, acts more like a wilderness novice than a seasoned scientist, and Wheatley uses his inexperience to heighten the dread. Bird calls in the forest mimic human screams. Martin develops a mysterious rash that looks like a configuration of runes. Wheatley’s close-ups find importance in holes, and the emptiness they represent: a circular gap in a stone that looks like a portal, the gaping maw of an abandoned tent deep in the forest, a horrendous gash on Martin’s foot, spurting blood. Where does the mass that used to be in a hole go, and what happens to our ecosystem, our society, or our relationships when the centre cannot hold?

Wheatley handles all this early setup deliberately and per usual, he imbues his visual language with more spookiness via a brutal electronic score by long-time collaborator Clint Mansell. But also per usual, Wheatley tends toward self-indulgence. About half an hour in, In the Earth takes a turn that’s tedious and thoroughly predictable. After one new character is introduced, there are no plot surprises and the middle portion of the film admittedly drags.

But to be fair to the filmmaker, perhaps shock isn’t exactly what he’s trying to communicate with in the Earth. Instead, his curiosity is focused on the unexpected overlaps between rigid repetitions of folklore and mythology on one side, and inflexible belief in scientific evidence, data, and demonstrable patterns on the other. Cosmic horror films thrive in the tension between what we can and cannot rationally explain, and in the knowledge that our lives are often insignificant compared with the whims of larger existential forces. Like the recent cosmic-horror film Colour Out of Space, Wheatley creates tension through inexplicability, and litters the plot with prickly details that snag Martin and Alma like stinging nettles, marking them as trespassers in this place.

In spite of the pair’s knowledge and capability, the forest thwarts their assumed dominance over the natural world. When pressed, Martin can’t exactly explain what drew him to Dr Wendle, nor the connection they have. Alma, who knows these woods well, is unnerved by plant life that doesn’t seem to fit the region’s ecology. The film abruptly and intermittently cuts to black, and never acknowledges lost time. Wheatley’s visual tricks include trees that look like human silhouettes, while a stone obelisk that appears out of nowhere takes on outsized importance. Singularly, these aren’t immediately scary elements. But altogether, they coalesce into an enveloping kind of strangeness where every element, from an innocuous rock shard to the Parnag Fegg legend, masks hidden danger. It’s a pandemic vibe if there ever was one.

“People get a bit funny in these woods sometimes,” Frank tells Martin and in the Earth uses that line to explore the acid-trip possibilities of the natural world, and how our human need for control pollutes it. The result is a film that arguably shows its hand too early by reducing its villains to mouthpieces for Wheatley’s face-off between magic and technology and belief vs. reason. But the unease that in the Earth builds is infectious, and its moments of gory brutality, prevailing awe and kaleidoscopic conclusion make it worth watching.