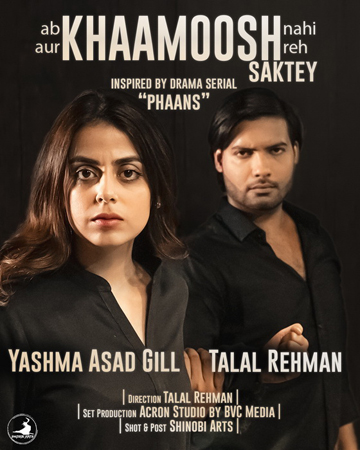 Yashma Gill is one of those actresses who have always made it to our newsfeeds for not only her performances but also for always standing up for social causes – and voicing out her opinion using her social media platform.

It is extremely important for people – especially celebrities and influencers to use their platforms not only for their work but also to bring attention to the many problems that are faced by the masses at large. That being said, it does come as a huge responsibility, and it isn’t always possible to be able to put what you’re feeling out there without being thrown under the bus.

Yashma Gill, who has managed to garner a large social media following has always been actively calling out to the officials for issues that seem important to her – and we see her talk about even the most sensitive of topics that most celebrities run away from, confidently on her social media. From animal rights, poverty, human trafficking, to much more – we have seen the actress bring attention to all these issues effectively.

In a recent update on her Instagram, the actress posted a heart-wrenching video, in support of the victims of rape. With a touching note penned by Yashma Gill, the project was her way of expressing her anger and disgust towards the treatment of rape survivors – and calling out to them to not remain silent anymore. The actress said, “Ab aur Khaamosh nahi reh saktay. Inspired by the drama serial #Phaans

When I signed this project I knew I was keen on making a difference. I wanted to help bring a new perspective to this mindset and belief system that revolves around rape culture. I wanted to try to provide a platform and for the people of our country to understand that this blame game and stigmatization surrounding the victim needs to stop.

They are not just survivors, in fact our heroes.

Yashma Gill, who has managed to garner a large social media following has always been actively calling out to the officials for issues that seem important to her — and we see her talk about even the most sensitive of topics that most celebrities run away from, confidently on her social media

I urge people to join hands and be able to voice and portray their own message or story in any form and through whichever platform available closest to them. And for those who cannot I urge them to personally approach me and I will try my personal best to make sure your voice is heard!

This is no longer just a statement, it is a fact that “AB AUR KHAAMOSH NAHI REH SAKTAY!”.”

Yashma Gill, who has been recently starring in Hum TV’s drama serial Phaans – which is a drama based on sexual harassment, rape, and the social stigma surrounding it. Inspired by the story of the drama where the actress is garnering praise for her performance, Yashma Gill plays the role of Hafsa has chosen to express her feelings and emotions with a heart-touching performance to push forward the narrative and encourage rape survivors to raise their voices against the injustice they face.

This is a great initiative that has been taken by the actress – as she urges survivors to step forward to tell their stories while providing them a safe space on her platform.