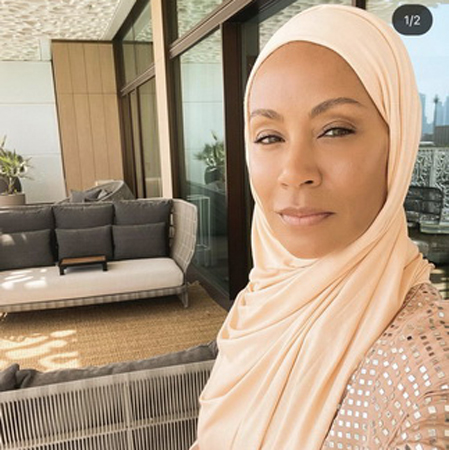 Jada Pinkett Smith is currently in the Middle East with husband Will Smith and her gorgeous hijab has made waves on Instagram.

Smith first shared pictures of herself with her head covered with an orange hijab last week with the caption, “When you are in the Middle East watching @willsmith on his sunrise run in my non-glamour glory and the talented @jas wants to capture it.”

The pictures were well-received by her Muslim audience who lauded the actor for respecting the Middle Eastern Muslim culture and choosing to wear the hijab while in the region. “You honoured the dress code,” acknowledged a fan with a heart-eyed emoji.

She has since shared more pictures of herself in a peach-hued hijab, saying, “I really think the colour peach in the Middle East suits me.” The particular post elicited reactions from entertainment industry stalwarts including Priyanka Chopra who left a comment saying, “Beautiful.” Belgian-Morrocan filmmaker Adil El Arbi, who directed the Will Smith starter Bad Boys For Life also commented, “Masha Allah sister.”

One fan wrote, “Come through Mrs @jadapinkettsmith looking like a sistah sister! Enjoy the experience and thanks for showing folks that respect for other people’s religion and cultural practices is indeed a good thing!”