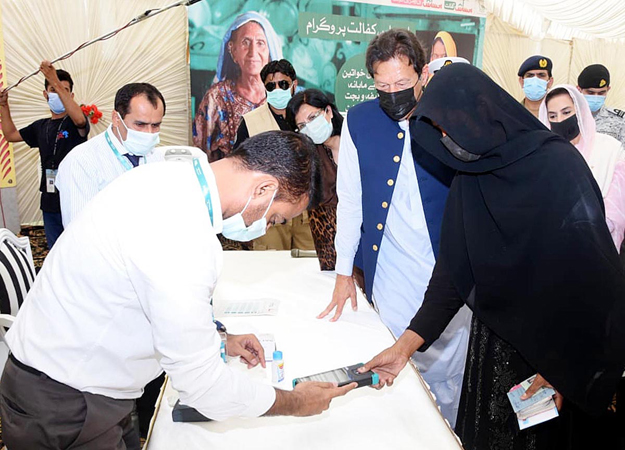 The prime minister, while addressing a ceremony to hand over business loan cheques among the entitled youths here, said proposed projects would start getting shape within a month as feasibility studies have already been completed. He said he is pleased to visit the interior Sindh with a good news of development package, which otherwise is the responsibility of the provincial government under the 18th Amendment. He said Interior Sindh is the poorest area of the country, besides Southern Balochistan and now merged tribal districts. He also likened the development outlook of the interior Sindh with Mohenjo-Daro and said instead of any advancement of the people were moving backward.

The development package consisted of the restoration of 200,000 acres of land, upgradation of 14 passports offices, construction of Nai Gaj Dam to irrigate around 28,800 acres, 306-kilometer Sukkur-Hyderabad Motorway, gas supply to 160 villages and annual 30,000 new power connections to the deprived districts. “We will assist the uplift of backward areas of Pakistan honestly and trustfully. I am proud that we gave first development package for southern Balochistan in Pakistan’s history. We also gave the biggest package for now merged tribal areas which would be increased too. I again commit to my people in Sindh that I will try my utmost to improve their living condition,” he said.

He said despite giving its allocated share to Sindh province, the federal government had scrapped this Rs 446 billion for Sindh development package which would focus skill training to youth, business loans, sports facilities and building communication network. He said it was essential to exploit the potential of 60% below-30 population to make them an asset who otherwise would become a liability.

He said it was also equally essential to develop playgrounds for the youth to make them exhibit their talent. He said New Zealand with a population of around 6 million had more playgrounds than 220 million nation of Pakistan.

Imran Khan said the Sukkur-Hyderabad Motorway would facilitate the transportation of logistics besides bringing ease of doing business in the country. He said the government distributed cash assistance under Ehsaas Emergency Cash Programme among 15 million families after the poor suffered due to COVID-19 lockdown. He said Sindh, with 22pc population, got 33% share in Ehsaas Cash Programme, which manifested that the amount was distributed fairly and without any political discrimination. Referring to Bundal Island project, the prime minister said the federal government had designed the project to attract $40 billion investment to help surge foreign exchange reserves and empower local currency. But unfortunately, he said the Sindh government withdrew its no objection certificate issued to federal government due to the unknown reasons. The people of Sindh would have been the biggest beneficiary of the project and that even the federal government had also offered the profit of the project to the province, he said, and hoped that the Sindh government would review its decision on NOC cancellation.