Pakistan’s Rizwan named among five Wisden cricketers of the year 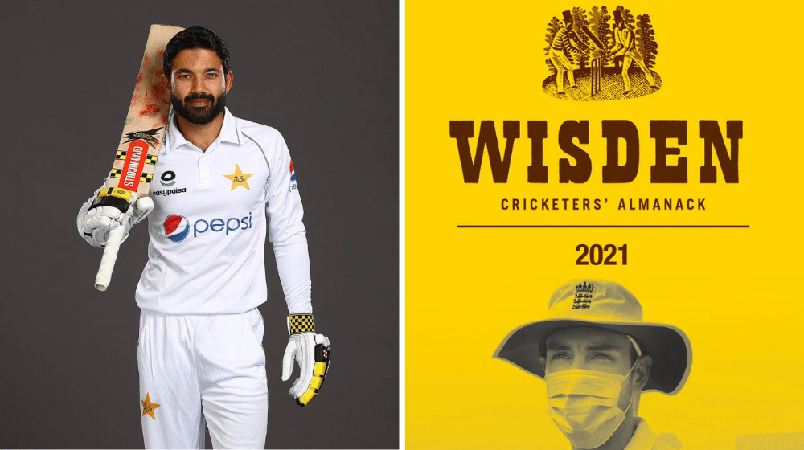 LAHORE: Wisden has included Pakistan’s wicketkeeper-batsman Mohammad Rizwan in its 2021 list of ‘Five Cricketers of the Year’. Rizwan is named among Dom Sibley, Zak Crawley, Jason Holder and Darren Stevens. Rizwan is the 18th Pakistani in history to feature among cricketers of the year by Wisden. “Rizwan was an electric presence behind the stumps for Pakistan, pulling off arguably the take of the summer when he caught Ben Stokes high to his left during the First Test at Old Trafford. He also averaged 40 with the bat, and was later confirmed as his country’s new captain,” said Wisden’s editor Lawrence Booth. The Wisden Cricketers of the Year are players selected for the honour by the annual publication Wisden Cricketers’ Almanack, based primarily on their influence on the previous English season. Players are chosen with “excellence in, or influence on, the previous English summer” the main criteria, and cannot be chosen more than once in their career.

The Wisden Cricketers’ Almanack – often labelled the “Bible of cricket” – is an annual publication founded in 1864. John Wisden – a.k.a. “the Little Wonder” – was a prominent cricketer of the mid-nineteenth century. In 1850, he took ten wickets in an innings ––– all bowled ––– in a North vs South encounter at Lord’s. It remains a record in first-class cricket. John Wisden sold sports equipment from his London shop before branching out into publishing, producing the inaugural Wisden Cricketers’ Almanack in 1864. The sporting goods business declined in the Second World War but the Wisden Cricketers’ Almanack continued to flourish, establishing itself throughout the twentieth century as the most authoritative record of cricket in the world – a little wonder in its own right. The name Wisden is synonymous with cricket itself: it is arguably the most famous and respected sports publication in the world. The Five Cricketers of the Year, a feature since 1889, form the game’s hall of fame, and the almanack has named the Leading Cricketer in the World for the previous calendar year since 2004.

In 1955, Fazal Mehmood became the first ever Pakistani to be named by Wisden among cricketers of the year and since then a total of 18 players have made themselves to this list. In 2017, two Pakistani cricketers –– Misbah ul Haq and Younis Khan –– were named in the list by Wisden. Other notable Pakistan cricketers who marked this achievement, over the years, include Asif Iqbal, Hanif Mohammad, Majid Khan, Zaheer Abbas, Javed Miandad, Imran Khan, Salim Malik, Waqar Younis, Wasim Akram, Mushtaq Ahmed, Saeed Anwar, Saqlain Mushtaq and Mohammad Yousaf.

Darren Stevens, the Kent all-rounder, was named as one of Wisden’s Five Cricketers of the Year 2021 at the age of 44, the fourth-oldest on record, after a standout performance in the Bob Willis Trophy. Zak Crawley, Stevens’ county team-mate, was another Cricketer of the Year after his feats for England. Crawley scored 267 against Pakistan in the third Test at the Ageas Bowl, a knock bettered only once by an England No. 3, when Walter Hammond made 336 not out at Auckland in 1932-33. Crawley also scored centuries against Hampshire in the Bob Willis Trophy and the T20 Blast. He was joined on the list by fellow England batter Dom Sibley, whose stubborn presence at the top of the order was typified when he batted for more than nine hours to score for 120 and help square the series against West Indies. Jason Holder, the West Indies captain on that tour, also made the list.

Honour for Ben Stokes: Ben Stokes has been named as the leading cricketer in the world for a second consecutive year in the 2021 edition of Wisden Cricketers’ Almanack, which is published on April 15. Stokes amassed 641 Test runs at 58.27 for the calendar year, which was more than anyone else, while his 19 wickets cost just 18.73 runs apiece. The honour comes after Stokes was named leading cricketer in the world in the 2020 edition, having guided England to their maiden World Cup title in 2019 and then producing one of the great Test innings to defeat Australia in the Ashes Test at Headingley. In doing so, Stokes ended a three-year run for India’s Virat Kohli in winning the award and became the first English player since Andrew Flintoff in 2005 to be regarded as the best contemporary player in the world.

Kieron Pollard was named as the Leading T20 Cricketer in the world with 59 sixes in various competitions –– at a rate of one every 5.5 balls –– with a staggering strike rate of 199.07 and averaging 53.58. He also added to his considerable list of titles, with Trinbago Knight Riders winning the CPL and Mumbai Indians following suit in the IPL. Elsewhere in the Almanack, Wisden marks 50 years of ODIs by naming its greatest player for each decade: Viv Richards (1970s), Kapil Dev (1980s), Sachin Tendulkar (1990s), Muttiah Muralitharan (2000s) and Virat Kohli (2010s).