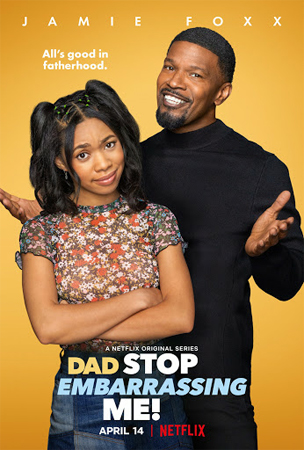 Jamie Foxx does it all. He’s an Oscar-winning movie star and a Grammy-winning recording artist with a standup comedy background. At 53, he still maintains the physique of his days as a record-breaking high-school football star. He has, by all accounts, a solid relationship with his two daughters, which doesn’t seem to conflict with his status as one of Hollywood’s most eligible bachelors. In 2016, he even saved a stranger’s life by rescuing him from a burning truck after a traffic accident. Playing the sitcom dad in Netflix’s new series, though? This might be the one thing that Jamie Foxx is properly rubbish at.

Tributes to the late Paul Ritter have provided a recent reminder of the sitcom dad par excellence. On Twitter, King Gary’s Simon Day, summarised the genius of Ritter’s Friday Night Dinner performance as “just the right amount of odd and angry you need in that closed environment and always part-dressed, which is integral to being a father in the home.” Dad Stop Embarrassing Me!, a show co-executive-produced by Foxx and his eldest daughter Corinne, hits none of these vital notes. While it’s an oft-observed phenomenon that even the coolest cats can inflict toe-curling cringe on their own offspring, the ultimate embarrassment here is the show’s slapdash approach to situation comedy.

In fairness, Friday Night Dinner probably wasn’t foremost in the mind of showrunner Bentley Kyle Evans when called upon to create this vehicle for Foxx’s return to sitcom, 20 years after their collaboration on the little-mourned Jamie Foxx Show. Rather, the influence of The Cosby Show, The Fresh Prince of Bel-Air, Black-ish and Moesha is plain. Foxx plays Brian Dixon, the CEO of a successful cosmetics company who begins playing a more active role in the life of his 15-year-old daughter Sasha, when she moves from Chicago to his spacious Atlanta home, following the death of her mother. Also in residence are Brian’s glamorous sister Chelsea and his ex-con father, “Pops”

“Deadbeat dad on a steep parental learning curve” could be a fruitful set-up for heart-warming comedy, especially if – as hinted in the show’s pre-release publicity – it derived some emotional truth from Foxx’s own family dynamic. Corinne Foxx supposedly lent her teenage diaries to the writing team for inspiration, yet the show still reaches for the same old after-school special plotlines that family sitcoms have been wheeling out since time immemorial: Brian overreacts when Sasha gets a boyfriend; Aunt Chelsea offers advice on dealing with bullies; Pops finds he has more in common with the Latino handyman Manny than previously assumed, and every conflict is resolved with a heart-to-heart on the back porch.

In fairness, ‘Friday Night Dinner’ probably wasn’t foremost in the mind of showrunner Bentley Kyle Evans when called upon to create this vehicle for Foxx’s return to sitcom, 20 years after their collaboration on the little-mourned ‘Jamie Foxx Show’

The rest is a mix of racial comedy – the kind that’s a staple of American humour, but often sounds lazily regressive to British ears – and oddly glib nods to hot-button issues. Brian’s best friend, for instance, is a buffoonish white cop who hangs around at Brian’s while on duty, but the topic of police racism only comes up belatedly and ineptly. A running joke about too-tight trousers might be a sly reference to Bill Cosby’s infamous “pants down around the crack” dig at young Black Americans, but if so, it is pretty oblique. Besides, let’s face it, Foxx isn’t all that embarrassing: he can’t help but pull off the most flamboyant outfits, and even his ‘”dad-dancing” has unerring rhythm.

Something that Sasha probably should find embarrassing, but apparently doesn’t, is the ceaseless celebrity name-dropping. I counted shoehorned mentions of Kanye West, Barack Obama, Dave Chappelle and Snoop Dogg in the first few episodes, and never with any satirical justification. How could Foxx risk an insult, when these guys are all among his best showbiz buds?

When Eddie Murphy hosted Saturday Night Live back in December 2019, he looked directly into the camera and, in reference to Bill Cosby’s imprisonment and their long-running feud asked “Who is America’s dad now?” It got a big laugh, but his recent film Coming 2 America would prove the spot was still open. We now know that Foxx won’t be filling it either, although Dad Stop Embarrassing Me! does offer one valuable piece of parental inspiration. Jamie Foxx is the kind of dad who’s willing to invest his energies into an obviously sub-par series, if it might give his daughter a leg-up in the industry. Just give the guy Father of the Year, already. He’s earned it.