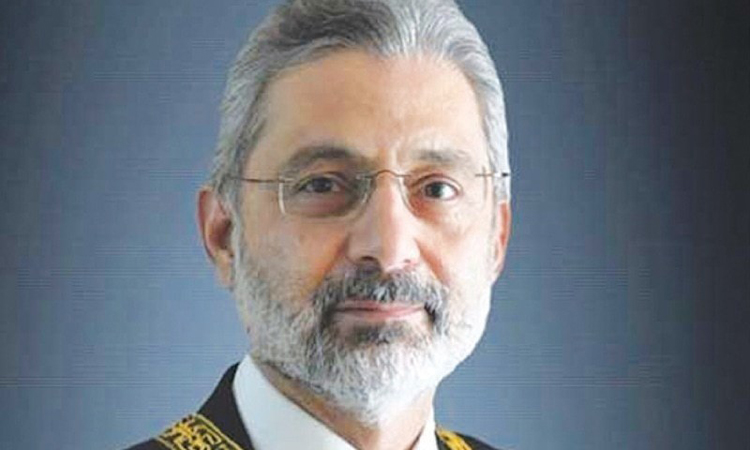 Justice Qazi Faez Isa has alleged that the Supreme Judicial Council (SJC) acted “maliciously” against him and never gave him the chance to defend himself, adding the SJC did a massacre of justice.

The SC judge made the comments on Thursday while presenting his arguments for a review petition against the Supreme Court’s ruling on the presidential reference filed against him.

Criticising former chief justice Asif Saeed Khosa, the judge said that the former top judge “stabbed me in the back” without listening to his point of view. “My fellow judges in the SJC declared me a madman,” said Justice Isa.

He further said that his fellow judge, Justice Azmat Saeed, had been a friend and had disappointed him (Justice Isa) with his judgement on the matter. “Today, the former judge is a favourite of the ruling party,” Justice Isa alleged.

The judge complained to the bench that Law Minister Farogh Naseem had made “serious allegations” against him and his wife. “The decision to quash the reference against me was based on the Constitution and law. My wife was not a party to the case, yet the decision was against her,” said Justice Isa.

He alleged that Naseem had “no respect for the court” and that “his ministry is more important to him”. “This is the first time that a law minister has declared the Constitution of Pakistan to be in conflict with fundamental rights,” said Justice Isa.

The judge further complained to the court asking why, even after the end of the hearing, the law minister kept submitting written arguments to the court.

He also asked why the Federal Board of Revenue was ordered to complete its investigation before the detailed verdict was issued in his case, alleging that Tax Commissioner Zulfiqar Ahmed went ahead with the investigations only due to the court’s pressure. He further added that President Arif Alvi “did not even bother” to respond to the three letters he sent to him on the presidential reference.

“I did not even get a copy of the reference but it was run on the media. Fifth generation war was started against me and my family,” said Justice Isa.

Justice Isa regretted that everyone other than former TLP chief Khadim Hussain Rizvi filed a review petition challenging his findings. “[Even the] PTI and MQM also filed an appeal against the Faizabad sit-in decision. The PTI’s review petition said that I am not qualified to be a judge. I really am not qualified to be a judge because I talk about fundamental rights,” said Justice Isa.

Justice Isa appealed to the court to hear the instant case in the mornings so it can be wrapped up at the earliest because Justice Manzoor Ahmad Malik, part of the bench, is retiring soon.

However, one of the judges reminded him that time had been lost due to a related petition filed by Justice Isa himself.

“You are just now remembering that there is less time,” observed Justice Bandial, reminding the judge that he “wasted the complete month of March by filing an application for the live coverage of his hearing”.

Justice Isa responded that he had requested live coverage of the case as it was “important” to restore his “image”, which he believes has been tarnished in front of the public.

“A person‘s image is in the hands of Allah and you should trust him,” said Justice Bandial in response. Justice Isa retorted saying that he was more worried about the Supreme Court, and that he himself was “nothing in front of it.” The court, after hearing the arguments, adjourned the hearing till April 19 (Monday).