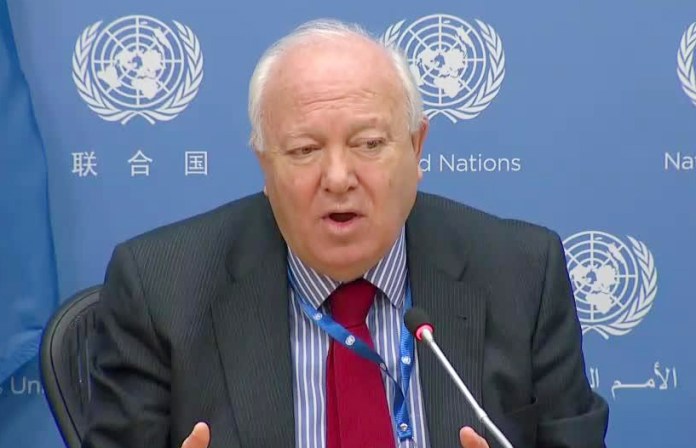 UNITED NATIONS: The top official for the United Nations Alliance of Civilizations (UNAOC) has strongly condemns acts of anti-Muslim hatred that took place in Western France where vandals defaced the walls of a mosque with Islamophobic graffiti two days ahead of the start of the holy month of Ramazan.

A statement issued on Wednesday by UNAOC’s spokesperson said that he High Representative for the alliance, Miguel Ángel Moratinos expressed his solidarity with the Muslim community in France and beyond and wishes them a blessed and peaceful Ramadan.

Moratinos denounced the graffiti on the walls of the Avicenne Islamic cultural center in the western French city of Rennes.

According to news reports, the hate slogans were discovered on Sunday on a side building used as a prayer room when prayers were taking place. Earlier, in the neighboring city of Nantes, the door of the Arrahma mosque was destroyed by a fire.

The UNAOC High Representative called those acts “despicable”, saying they were an affront to international human rights laws and the values and principles the United Nations upholds, particularly the freedom of religion or belief.

He added that now more than ever, unity and solidarity should be guiding our actions as “we stand firmly against the surge in anti-Muslim hatred, stigma, ethnonationalism as well as hate speech targeting vulnerable populations based on their religion or belief.”

Moratinos recalled the UN Plan of Action to Safeguard Religious Sites, developed by UNAOC, and encouraged governments and relevant stakeholders to support the implementation of its recommendations, which emphasize the universality of religious sites as symbols of shared humanity, history, and traditions.

He stressed that mutual respect, interfaith harmony, and peaceful co-existence were attainable when there is broad space for everyone to freely and safely practice the rituals of their religions or beliefs.