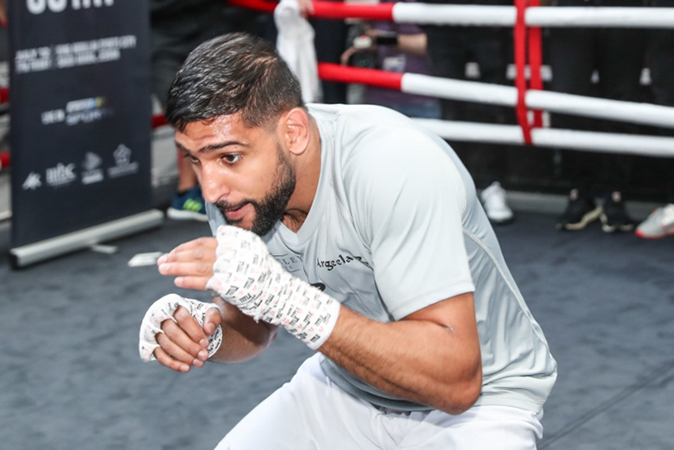 LONDON: Bolton boxing legend Amir Khan has opened up about his retirement plans in the fifth episode of BBC’s Meet The Khans: Big in Bolton. In a heartfelt discussion with his wife, Faryal Makhdoom, Amir announced that he as “one or two” fights left in him before hanging up his boxing gloves. In the episode, Amir said: “People keep saying to me- ‘when are you going to retire?’ because I’ve been there and done it. But it’s so hard to walk away from the sport.” The 34-year-old added that boxing is something that “defines” him.

However, Faryal isn’t happy that Amir wants another fight and declared that she will “never let the kids watch” his fights. In the emotional discussion, she also revealed that she finds it “difficult” to watch the man she loves get punched and finds it difficult to eat on the days of his fights. She said: “it’s not about winning or losing- it’s about coming home to us safely one punch can change your life.” However, Amir announced that he doesn’t have any plans to retire soon. Replying to Faryal in the episode, he said: “Boxing’s what keeps me busy and occupied –– when that stops I’ll be lost myself. I don’t wanna stop yet ––- I’ve got the energy to have one or two more fights so what’s the point in stopping now?” Amir continued: “It’s not the money I’m chasing because God has been kind and I don’t ever have to work again. I wanna’ leave the sport knowing that I’ve left it at the right time. “Now it’s about being smart and picking the right fights “Once I hang my gloves up in a couple years’ time- that’s it I’ll never look back”

Faryal and Amir also talked about Amir’s participation in the 2004 Olympic Games. He won a silver medal in the lightweight division at the 2004 Olympics, becoming at the age of 17, Britain’s youngest boxing Olympic medalist. Recalling the event, Amir said: “The blood, sweat and tears to achieve that was well worth it.” Amir also represented Bolton in the 2012 Olympic games when he lit the Olympic torch and ran through the town with it.