LAHORE: Residents of various cities across were stuck in traffic jams on Monday as a religious party held its protest in Karachi, Lahore, Islamabad, Rawalpindi, Multan and other cities. 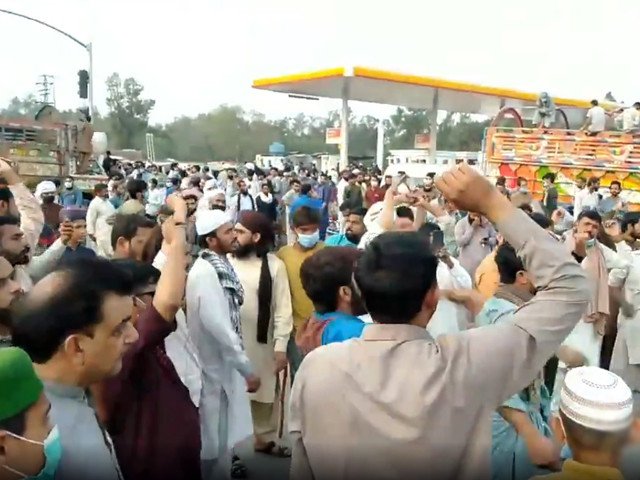 According to a TLP spokesperson, Rizvi was arrested from Punjab capital’s Iqbal Town area, where he had gone to attend a funeral.

Saad Rizvi is the son of the firebrand cleric, and previous head of the TLP, Khadim Hussain Rizvi, who died in November last year.

A senior police official also confirmed that Rizvi had been taken into custody on Monday as a “pre-emptive measure” ahead of TLP’s April 20 deadline. No first information report (FIR) against the TLP central emir has been registered so far.

TLP had announced a sit-in in Islamabad on February 17 to press for its demands. But on February 10, a government committee headed by Religious Affairs Minister Qadri assured TLP that it would present its demands in the parliament for approval by April 20.

Ashrafi said that the police didn’t furnish any reason for the arrest, and maintained that it was an attempt to sabotage the protest against the government called for April 20.

It bears mentioning that, last year, TLP supporters had brought Islamabad to a standstill for three days with a series of anti-France rallies.

Police blocked the demonstrators as they attempted to enter the capital. Some chanted that the only punishment for a blasphemer was beheading, police official Tauqeer Shah said.

The protesters attacked the police with bricks, stones and sticks, he added. They were pictured blocking the road into Pakistan’s capital.