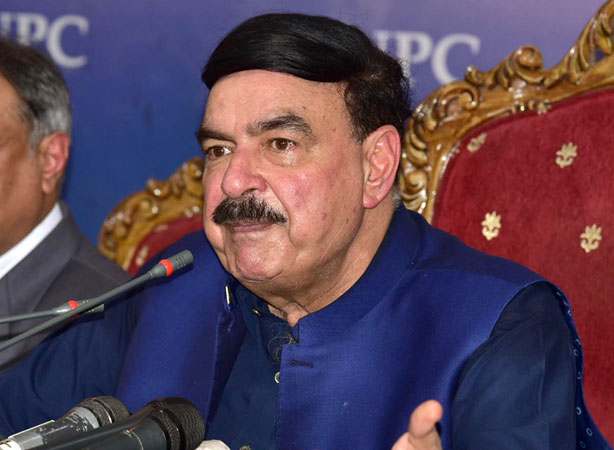 “Broadsheet inquiry commission has recommended reopening the Swiss cases,” Sheikh Rasheed said while addressing a presser in Karachi. He said the past government gave away $60 million in the Swiss cases.

Sheikh Rashid Ahmed also announced that the e-passport system will be inaugurated from Karachi by June this year.

The interior minister said that over 300,000 visas have been issued and 12,000 visa applications were rejected during his tenure. He said that more NADRA (National Database & Registration Authority) and passport offices will be opened in the port city.

Sheikh Rashid said that the FIA Cyber Crime Wing is being strengthened and the new capable youngsters will be recruited.

Praising the Prime Minister, Rashid said that he is fighting a battle against all mafias in the country. “Imran Khan is trying to put a stop to those who are involved in looting and plunder,” he said.

Speaking about the issues of inflation and other problems plaguing the country, Rashid said that PM Imran Khan is monitoring inflation in the country himself on a daily basis.

He lashed out at the opposition, saying it is the PTI’s luck that it has to deal with such an inept opposition, referring to the Pakistan Democratic Movement’s (PDM) internal conflicts.

“Who says we are not ready to talk,” he asked. Referring to the opposition, he said: “Talk to us about electoral reforms and other stuff, we are willing to engage with you. However, unfortunately, due to various programmes on media, misunderstandings arise.”

The minister spoke about the MQM-P as well, saying that he harboured good relations with the party. He said the Prime Minister will ultimately take the decision on whether or not the party’s sealed offices can be reopened.

He said some people were running an organised campaign against Mirza Shahzad Akbar, Advisor to the Prime Minister on Interior and Accountability. “Shahzad Akbar is overseeing the cases on money laundering and against the sugar mafia,” he said. “The Federal Investigation Agency reports to me but I am letting Shehzad Akbar do whatever he is doing,” he added.

Reply to a question, Sheikh Rashid said that the process of fencing the Afghan border will be completed by June this year and work is underway on the border with Iran.