‘The Big Bull Movie’ — even in the world without scam 1992, this shouldn’t exist! 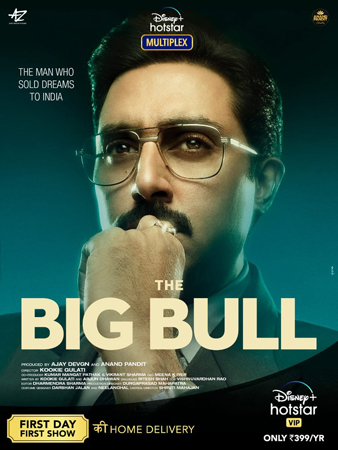 Back in the 90s, Hemant Shah starts as a sky-dreamer underdog, but then he explores the loopholes of the country’s banking system to manipulate them. Along with his brother Viren, Hemant earns quick big bucks using his research and intelligence about the stock market.

On the other hand, a journalist Meera, has just started to understand the street-smart shenanigans used by Hemant to be crazy-rich in no time. Upon investigating the case, she tries to expose the ways Hemant uses the banking system for this own profit. Where will this end? Will anyone ever outsmart Hemant? That’s the pending story!

Director Kookie Gulati teams up with Arjun Dhawan to pen the story, which is the root of what’s all bad about the film. I first decided to do the review without mentioning Hansal Mehta, Pratik Gandhi’s Scam 1992, but it’s practically impossible to do that. I read somewhere that this is a ‘fictionalised’ retouch to the actual events that happened in Harshad Mehta’s life. Apart from one unworthy twist towards the end and a few uncalled for modified details, there’s no single twist for those who have watched the show. Even in the world without that show, this would’ve been a mediocre project at its best.

You can’t fit in just as much in a 130-minutes film, and that’s the result why everything is just scattered from the word go. From the process of Hemant turning into the ‘big bull’ to including the country’s most important person in his scam, everything just swirls around you without leaving any impact. The hollow writing, trying to fit in as much as possible, results in a half-baked, half-hearted outcome.

For some reason, Ritesh Shah still writes dialogues like “jo baadal garajte hai, woh baraste nahi.” I mean, I know the film is set in the 90s, but the audience who’ll watch this film is still in 2021 or the future if some uninformed people decide to watch this over Scam 1992. Credit where due, there are some good dialogues delivered wonderfully by Abhishek Bachchan, but they’re too few even to mention.

Dharmendra Sharma’s editing follows the age-old method of telling the story in a flashback through a strong character’s point-of-view. But the problem is, this story is narrated by Ileana D’Cruz, who should’ve been an important character but is brutally sidelined in the narrative. I totally understand you can’t show everything in 130 minutes, but you could’ve easily edited out the wafer-thin romantic sub-plot between Abhishek & Nikita Dutta. Instead, highlighting the intriguing investigation of Ileana’s character.

Before getting into goods of Abhishek Bachchan, let’s talk about how he’s the victim of an overdramatised writing. He does this ‘devilish laugh multiple times throughout, & it will scar you for life. WHY? In the list of ‘giving unique characteristics to your lead’, AB’s demonic laugh should be right below Akshay Kumar’s ‘ha ha ha ha ha’ in Jaan-E-Mann. Despite all the flaws, Abhishek is the only saving grace in this otherwise scattered script. If I don’t think about Pratik Gandhi, Abhishek was actually a perfect choice for this character but with a different filmmaker.

Sohum Shah relies way too much on the writing material, which makes him look artificial at times. I even had certain issues with the mismatched timing of his dialogue delivery. Otherwise, an amazing actor, Shah doesn’t get any significant scope to shine here. He gets one outburst scene towards the end, which leaves no impact because you know what.

This was a tricky area for the makers because, in its very limited time, it was impossible to lay a strong base for both Ileana D’Cruz and Nikita Dutta’s tracks to develop. Makers find a midway which leads the film to the world of barren, boring land. Both end up underused but with a silver lining of a good screen presence.

The stellar supporting cast consists of Saurabh Shukla, Samir Soni, Mahesh Manjrekar, Ram Kapoor, but unfortunately, none of them delivers a performance to remember. Their performance felt just like this sentence – same old routine monotonous, repetitive stuff. Trying to do similar things in a different film.

I swear the makers had me with the first poster featuring Abhishek Bachchan, but then I stared at the name of the film’s director for a long time, reaching the conclusion of how risky this decision is. Today is when all my fears came to life, and yes, this is where things start to crumble. Harshad Mehta’s story has enough masala for any director to choose a dramatic route to narrate it. But did it prove to be the correct route? Of course not; this story needed detailing, which ultimately brought the ‘swag’ out in Hansal Mehta’s show.

Surprisingly, I didn’t mind Carryminati’s film version of his song Yalgar. It goes well with the montage of Hemant turning into the big bull. There’s one romantic track that adds to the list of unwanted things in the film.

All said and done; I’ll repeat something similar I said for Varun Dhawan’s Coolie No 1 – if you watched Scam 1992, skip this & if you haven’t watched Scam 1992, then watch Scam 1992. This will go down on the losing side in the battle of films/shows made on a similar story.