Armeena gets candid about actors’ unions and her eating disorder 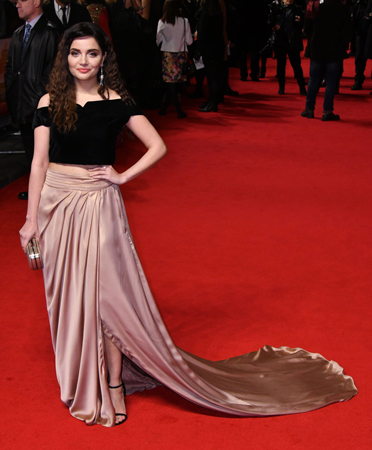 ‘In England, we have something called equity, which is like an actors’ union. All the actors are protected under that from their pay, minimum wage to how they are treated on-sets. Producers and directors and production houses are held accountable. Obviously, when you sign contracts and if you need to take someone to court, you are protected that way.’ The actor said.

Khan claims that Pakistan’s show business is severely deprived of these unions. She holds that nothing is “effective in a way.”

“I have seen some of my co-stars, for example, having trouble with their cheques; it’s their hard-earned money. Why should you have to go and beg? It is just so wrong. It hits your dignity,” she added. The Janaan actor, who can be seen starring as a villain in her latest drama role, Mohabbatain Chahatain, also reflected on her initial years of stardom, revealing how she suffered from an eating disorder. The actor attributed this health condition to lack of experience and guidance, and not knowing how the industry worked. “There are no guide books to tell us how you are supposed to behave in the public stratosphere.” The actor claimed.

“I was already a very, you know, thin little girl, very young, no experience of the world apart from academia, and the beauty industry and the acting world swallowed me.” Khan added.

The 34-year old star went through a whole process of discovering how the entertainment industry functioned, and eventually learned and evolved as she moved forward. ‘There was a lot of introspection; there was a lot of research. There was a whole evolution physically and mentally for me, and as I realized how things were, I started discarding the things that were like almost abusing my body in a way.’

‘I have seen some of my co-stars, for example, having trouble with their cheques; it’s their hard-earned money. Why should you have to go and beg? It is just so wrong. It hits your dignity,’ she added

Armeena did not seem very optimistic when asked if her experience with an eating disorder would encourage openness in Pakistan’s superficial entertainment industry with celebrities opening up about their personal struggles. “Why would it?” she questioned. “We are not ready to have these conversations yet. We are still stuck on the size zero thing. The West has moved on.”

“There are measurements in place even for models. For example, in France where they will measure their waists to make sure the girls are not malnourished. If they are underweight, they will not take them or any jobs.” Khan added.

Armeena spoke out against the beauty industry and the acting world for setting forth unrealistic expectations for women to live up to. “Somewhere in our search for the meaning of life, we’ve internalized perhaps that Instagram is our life or being skinny is our life but really, the moment we are born, we are dying,” she said.

Khan went onto add that if she ever had a daughter one day, she would tell her very frankly that the beauty industry is “out to prey” on her insecurities.

‘They revel and make profit out of the feeling that you feel ugly and inadequate. So, beware that you don’t fall prey to these unrealistic beauty standards. I am in the media and I fell prey to this, so imagine like what a young girl of 13 or 14, what would she be thinking? I really fear for the world and the direction that we are going in.’

Besides struggling personally with abnormal eating habits, Armeena was body shamed for her most recent role of Tara in HUM Television’s drama Mohabbatain Chahatain in which she stars alongside Hira Mani and Junaid Khan.

‘If you go under the YouTube comments for Mohabbatain Chahatain, I was body shamed; called fat and ugly and God knows what. After you put so much in; you put sleepless nights in, and this is the kind of response that you get for the first episode. It was really heartbreaking.’ she said.

“What they saw in perhaps in things like Bin Roye or the very early projects I had, I was literally emaciated underneath all those mountains of clothes. I was 39KGs, and that was dangerously low.” The actor revealed further.

Khan got deeply personal with Rifaat in a one-on-one session, claiming how she stopped her monthly cycles. ‘I am going to be open here; I’d stopped my monthly cycles because of that. I stopped eating. That’s how dangerous it was. What it does is in the long run, it messes your metabolism up. You can develop osteoporosis. As women, you can have breakages. You really feel this as you enter into your 30s.’

Armeena Khan even shared how it was like living with an eating disorder on-sets. “Just came back into myself. This is me now. You are not going to get that old version who was emaciated and killing herself. I was killing myself. I was living on one apple a day. Go figure,” she said.

‘You know for months, fainting on sets and having no energy to deliver my dialogues. It really, really affected my performances, and my ability to take on more projects because I was so exhausted all the time. I had to turn down a lot of work.’ Khan added.