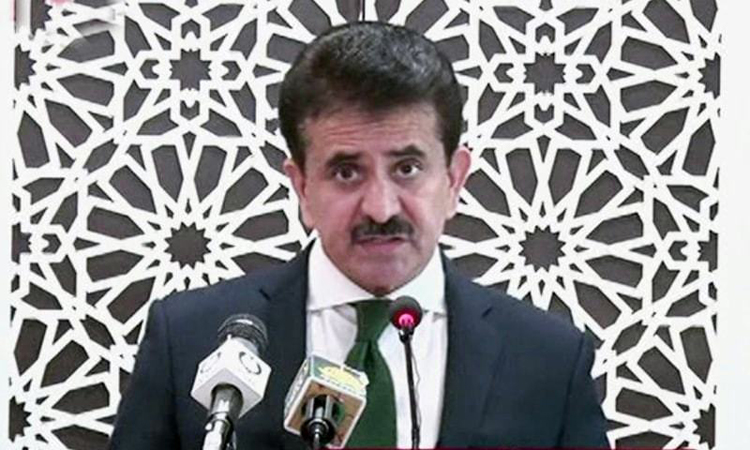 Pakistan has urged the international community to take cognisance of the unabated human rights violations in the Indian Illegally Occupied Jammu and Kashmir (IIOJK) and play its role in resolution of the dispute in accordance with the relevant UN Security Council Resolutions.

Addressing the weekly briefing on Friday, Foreign Office Spokesperson Zahid Hafeez Chaudhri said the extra-judicial killings by the Indian occupation forces continued unabated in IIOJK during the past week as well.

He said ten more Kashmiris were martyred in Pulwama and Shopian districts of IIOJK; and out of these seven were martyred on Thursday. The spokesperson said that Pakistan has repeatedly called for independent investigations under international scrutiny, into the extra-judicial killings of all innocent Kashmiris.

He said, “We have also consistently underscored the need for unhindered access to the UN human rights bodies, international human rights organizations and media to assess the human rights situation in IIOJK.”

The spokesperson said, “We are also concerned over the continuing military siege, incarceration of Kashmiri leadership, unprecedented restrictions on fundamental freedoms of the Kashmiri people and ongoing efforts to change the demographic structure of the occupied territory.”

Talking about the recent visit of Russian Foreign Minister Sergey Lavrov to Islamabad, the spokesperson said that Pakistan and Russia have agreed to intensify efforts to deepen cooperation in a myriad of sectors.

“During the delegation-level talks, the two sides agreed on the need to intensify efforts to deepen cooperation in all areas, including economy and trade, energy, counter-terrorism, security and defence, education, and people-to-people exchanges,” said Chaudhri.

“The visit provided both sides an opportunity to review the whole gamut of bilateral relations and share their respective perspectives on key regional and international issues,” Chaudhri added.

“The foreign minister underscored Pakistan’s desire for peace in Afghanistan and its continued support for the Afghan-led and Afghan-owned peace process. He also appreciated Russia’s role in the ongoing Afghan peace process.”

“The Foreign Minister noted with appreciation the close cooperation between Pakistan and Russia at the multilateral fora including the UN and the Shanghai Cooperation Organization (SCO).” The two ministers, he maintained, also discussed the potential of Eurasian Economic Union (EEU) and the Belt and Road Initiative (BRI), of which China-Pakistan Economic Corridor (CPEC) is a flagship project.

“During the call on the prime minister, bilateral relations and issues of regional and global importance were discussed,” he said.

The Premier, he added, underscored his desire for expanding cooperation with Russia, particularly in the areas of trade, energy, industrial modernisation, railways, aviation, security and defence sectors. “He also stressed the importance of a negotiated political settlement in Afghanistan. He appreciated Russia’s support to the Afghan peace process including through the recent meeting of the Extended Troika in Moscow.”

He further said that during the 10th summit of the D-8 hosted by Bangladesh in a virtual mode, the PM underscored the mobilising of finances and resources to recover robustly from the economic and health crises induced by Covid-19, and actions to expand intra D-8 trade from currently around US$100 billion to US$ 500 billion by 2030.