Minister for Railways Azam Khan Swati on Thursday said that there was huge potential in Railways and the department could play a key role in strengthening the economy of the country. “I want to remove the negative perception about PR”, he said while chairing a meeting with the officers of Pakistan Railways Karachi Division at the Office of Divisional Superintendent Karachi, City Station. Azam Khan Swati said that efforts were being made to make the Railways a paperless ministry. He directed the PR officers to focus on increasing the revenue generation of the department. He ordered outsourcing the freight wagons to private companies. “Every rolling stock should be handed over to private firms”, he directed. 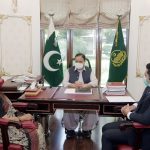