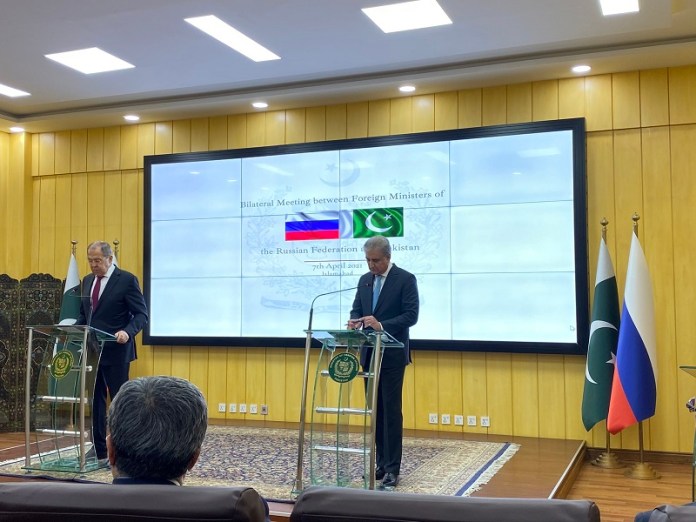 To further support the energy-deficit Pakistan, he said his country had offered delivery of Russian Liquified Natural Gas (LNG) through the Russian companies Gazprom and Novatek and was awaiting response from the partners in Pakistan.

The Russian foreign minister expressed satisfaction over the growth of bilateral trade by 46 percent and expressed readiness to “further strengthen economic relations”.

He mentioned that substantive growth of bilateral trade was mainly due to trade of over 200 million wheat to Pakistan and added, “We want to make this increase sustainable and diversity our trade”.

He said Pak-Russia Intergovernmental Commission to meet in Moscow the current year would be a key step in defining the sphere of cooperation in multiple areas.

On nuclear energy, he said Russia’s ROSATOM and Pakistan’s Nuclear Energy Commission were in touch for cooperation for use of technology for medicine and industry.

“This serves in the interest of all States of the region,” he said, adding an agreement was today reached on conducting more joint military exercises including the Arabian Monsoon maritime drill.

Since Pakistan’s accession to Shanghai Cooperation Organization (SCO) three years ago, he said, the country was actively pursuing its anti-terrorist strategy.

Lavrov expressed concern over the deteriorating security situation in Afghanistan and the rise of terrorist activities in north and east of country.

He mentioned that Russia and Pakistan agreed to “further facilitate the agreement among Afghan parties through inclusive political dialogue”.

On ties between Pakistan and India, the Russian foreign minister welcomed the efforts leading towards the normalization of relations between the two countries.

In the backdrop of tension in Middle East, he favoured establishment of the State of Palestine, saying that “Russia stands to facilitate a direct dialogue between Israel and Palestine”.

Foreign Minister Shah Mahmood Qureshi said Pakistan was keen to “build a strong multi-dimensional relationship” with Russia, considering it a “priority with a new significant approach”.

Welcoming the visit of a Russian foreign minister “in almost a decade”, he said Pakistan regarded Russia an as “important factor” in the stability of region.

Qureshi mentioned that the talks focused on strengthening cooperation in trade, energy, security and cooperation at United Nations and said, “In our cooperation, sky is the limit”.

He said Pakistan in view of its energy needs could greatly benefit from Russia.

Qureshi said the two countries had scope to cooperate within framework of Pak-Russia Security Dialogue and thanked the Russian foreign minister for acknowledging Pakistan’s role in anti-terrorism.

He mentioned briefing his Russian counterpart the situation at Pakistan’s border with India.

He expressed confidence that visit of Russian foreign minister would “deepen friendship and high-level contacts” between the two countries.

In response to a question, Qureshi said Pakistan had registered the Russian COVID-19 vaccine Sputnik in the country which was yielding good results.

He said Pakistan was looking forward for the Russian collaboration for local production of vaccine.

The Russian foreign minister said his government had provided 50,000 doses to Pakistan and intended to supply more 150,000 doses.