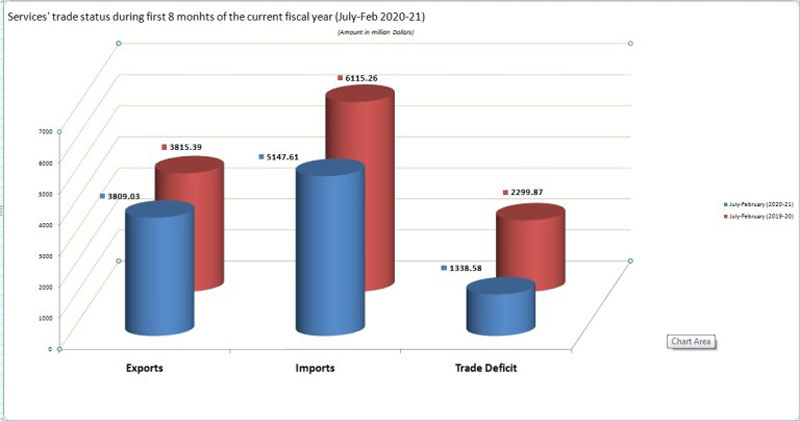 The country’s services trade deficit contracted by 41.8 percent during the first eight months of the current financial year (2020-21) as compared to the corresponding period of last year.

The services exports during the period under review witnessed slight down fall of 0.17 percent and were recorded at $3809.03 million against the exports of $3815.39 million last year. On the other hand, the imports into the country shrunk by 15.82 percent by falling from $6115.26 million to $5147.61 million, the PBS data revealed. Meanwhile, on year-on-year basis, the services exports from the country increased by 2.99 percent and were recorded at $484.08 million in February 2021 against the exports of $470.01 million in February 2020.

It is pertinent to mention here that the country’s merchandize exports increased by 7.12 percent during the first three quarters of the current fiscal year (2020-21) as compared to the corresponding period of last year. The exports from the country during July-March (2020-21) were recorded at $18.685 billion against the exports of $17.443 billion during July-March (2019-20), according to the latest PBS data. The imports during the period under review also increased by 13.57 percent by growing from $34.791 billion last year to $39.512 billion during the first three quarters of current fiscal year.