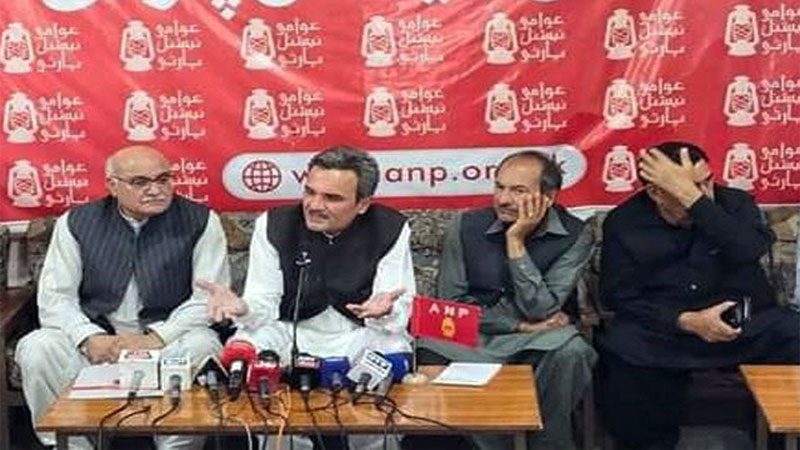 A day after show-cause notices were served to two opposition political parties by the PDM, the Awami National Party (ANP) on Tuesday formally announced to withdraw from what it called a ‘hijacked alliance’.

“PDM has been hijacked by some of its members for their own interests,” ANP Central Vice-President Ameer Haider Khan Hoti told a press conference after a meeting of the party leadership, as he announced the party’s decision to say goodbye to the opposition alliance. He criticised the issuance of show-cause notice to the ANP by PDM Secretary General Shahid Khaqan Abbasi for helping PPP in getting Yousaf Raza Gilani elected as opposition leader in Senate.

He said after the PDM’s planned long march had to be deferred due to differences among the parties on the issue of resigning from the assemblies, there was a need to end the ‘disagreements and bitterness’ in the alliance. He noted that the PTI and the JUI-F have joined hands to give PPP a tough time in Larkana. “Of course, an explanation for this should also have been provided, but neither should a show-cause notice have been served to PML-N or Maulana Fazlur Rehman,” he said. “And with what authority would one have served a show-cause notice?” he asked.

Hoti said such issues should have been taken up in a meeting of the PDM leadership. He said that it was expected from PDM chief Maulana Fazlur Rehman and Shahid Khaqan Abbasi that they would take decisions in their capacity as leaders of the alliance, not as members of the JUI-F and PML-N. “We know why they have given us the show-cause notice … Shahid Khaqan Abbasi, Shah Owais Ahmed Noorani, and [Abdul Ghafoor] Haideri came to my home and we already provided them a clarification,” he said. “For them to issue a show-cause notice nonetheless, can mean only one thing: they wish to harm our reputation,” he added.

The ANP leader said that such a move ‘makes it very clear’ that ‘two or three parties’ wish to take the lead in all decision making. “They consider ANP and PPP as obstacles in their way,” he added.

Hoti said that the party feels as if they have been “pushed against the wall”. “A leader’s position is not one to be used to attack in such a manner,” he said, referring to Fazlur Rehman. “A leader gives everyone a chance and tries to resolve all differences between parties of an alliance,” he added.

He questioned what the hurry was in making such a move, when Fazlur Rehman is ill. “He could have waited till he felt better and convened a meeting,” said the ANP leader, adding that if their earlier clarification had not been sufficient, another could have been sought during the gathering. “The manner in which this was done, makes it plain that a select few parties wish to use the PDM for their own agenda and priorities,” he said.

He said that for ANP, the agenda is the same that had been decided on September 20 and which is in the Charter signed by all parties. “If someone wishes to promote their personal agendas, then ANP can no longer be part of the journey,” he maintained.

Hoti recalled that the PPP had expressed reservations over the PML-N candidate for the Senate opposition leader office, Azam Nazeer Tarar. “Those reservations should have been addressed in a meeting of the PDM leadership. However, it was not done and the PPP’s concerns remained,” he said, adding that in such a scenario, the ANP openly decided to vote for the PPP candidate (Gilani).

The JUI-F and PML-N strongly reacted to ANP’s exit from PDM, terming it ‘the most humiliating move in country’s political history’.

Reacting to ANP’s hard-hitting presser, JUI-F’s secretary-general Senator Maulana Abdul Ghafoor Haideri said there were several ways to caving in and selling out. “This is the most humiliating move in political history … ANP and PPP’s actions have led to the world laughing at us,” he senator said.

Haideri warned ANP it had made a ‘blatant’ mistake after blaming PDM chief Maulana Fazlur Rehman for lacking leadership.

Similarly, PML-N spokesperson Marriyum Aurangzeb said ANP had made several sacrifices for the cause of democracy, as she expressed sorrow over their departure. However, she said PPP’s decision to get their member elected as the opposition leader in Senate was against the PDM’s September 20 Charter – as they got support from treasury benches, and ANP backed them. However, Aurangzeb reminded that the PDM had decided the opposition leader would be from PML-N.

The PPP has also decided to respond sternly to PDM’s show-cause notice issued a day earlier. Reports said PPP Chairman Bilawal Bhutto has asked party’s senior leaders to prepare a stern response to the notice. PPP leaders Sherry Rehman, Raja Pervez Ashraf, Farhatullah Babar, Nayyer Bukhari and others have been tasked with preparing the draft of the response. The reply would then be sent to Bilawal and PPP Co-Chairman Asif Ali Zardri for approval. The PPP has also summoned its Central Executive Committee (CEC) meeting following the development.