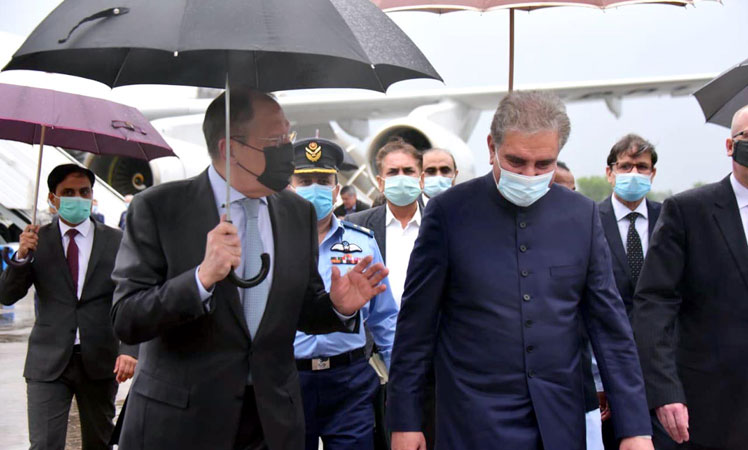 Russian Foreign Minister Sergey Lavrov arrived in Islamabad on Tuesday on a two-day visit aimed at holding wide-ranging talks on bilateral and regional matters amid growing relations between the rivals of the cold-war era in various fields including defence and security.

Foreign Minister Shah Mahmood Qureshi welcomed Lavrov, who is leading a 13-member delegation, on arrival in Islamabad from New Delhi, which was his first destination of the trip that will also take him to Kazakhstan, Iran and Egypt.

According to the Foreign Office, the Russian foreign minister will have delegation-level talks with Foreign Minister Shah Mahmood Qureshi on Wednesday. He will call on Prime Minister Imran Khan and have interaction with other dignitaries.

Qureshi said in a video message that Russia-Pakistan relations are heading towards a new direction with the prospects of enhanced trade and investment opportunities. “Today, after about nine long years, the Russian foreign minister is coming to Pakistan. Russia is the most important country of this region. No one can deny its significance and importance,” the foreign minister said.

Qureshi said the visit shows that Pakistan-Russia relations are heading to a new direction, adding relations between the two countries are improving and a better understanding is developing. He said that Pakistan and Russia are working on bilateral trade and investment cooperation in diverse fields. “We are looking as to how our economic ties could move forward. Defence cooperation is being discussed. How could we enhance our trade as recently when we had a shortage of wheat, Russia timely supplied us wheat. So that the prices here could remain stable. The bilateral trade and investment opportunities will be discussed,” he said.

Qureshi said that the two countries are on board on different regional issues and are especially having a close collaboration for peace and stability in Afghanistan. Earlier, Russian Foreign Ministry said about Lavrov’s visit that both sides plan to discuss the current state and prospects for the development of bilateral relations with an emphasis on cooperation in the trade, economic and counter-terrorism fields, exchange views on topical issues of the international and regional agenda.

Diplomatic relations with Pakistan were established on 1 May 1948.

“Today Pakistan is an important foreign policy partner of our country. Fruitful interaction is maintained at the international organizations, primarily in the UN and its specialized agencies. The cooperation between Moscow and Islamabad is based on the coincidence or similarity of positions on most of the problems of the world community, including issues of strategic stability and countering terrorism,” a Russian foreign ministry statement said. It further said opportunities for joint work have significantly expanded after Pakistan’s accession to the Shanghai Cooperation Organization (SCO) as a full member in June 2017.

An intensive political dialogue is maintained, including at the high and the highest levels. President of the Russian Federation Vladimir Putin spoke with Prime Minister Imran Khan on the sidelines of the SCO CHS meeting in Bishkek in June 2019; Russian Foreign Minister Sergey Lavrov had a conversation with Pakistani Prime Minister “on the sidelines” of the 74th session of the UN General Assembly in New York in September 2019.

Meetings of foreign ministers of the two countries Sergey Lavrov and Shah Mahmood Qureshi are held regularly (the previous meeting was held in September 2020 in Moscow within the framework of the SCO CFM meeting). The priority task is to expand trade and economic ties. In 2020, the volume of trade amounted to a record $ 790 million, an increase by 46% was inter alia due to large supplies of Russian wheat. Within the framework of the Intergovernmental Commission on Trade, Economic, Scientific and Technical Cooperation, specific projects of business partnership are discussed. The sixth meeting of the Intergovernmental Commission took place in Islamabad in December 2019.

The statement said energy is a promising area of business partnership. The flagship project is the construction of the North-South gas pipeline from Karachi to Lahore under the Intergovernmental Agreement signed in 2015.

Negotiations are underway with a view to an early start of its practical implementation. Other promising projects include the modernization of the Karachi Steel Mills built with the assistance of the USSR, the reconstruction of the energy and railway systems of Pakistan, as well as the supply of Russian civil aircraft.

About the Afghan conflict, the statement said a common concern is the situation in Afghanistan. “We look forward to an early finding of a constructive solution in order to end the civil war in the Islamic Republic of Afghanistan through agreements on the formation of an inclusive government with the participation of the Taliban movement.”

The statement said Russia will continue to provide the necessary assistance in advancing this process, including through the Troika Plus mechanism of Russia, the United States and China with the participation of Pakistan, the Moscow Format of consultations on Afghan issues, as well as the SCO-Afghanistan Contact Group.