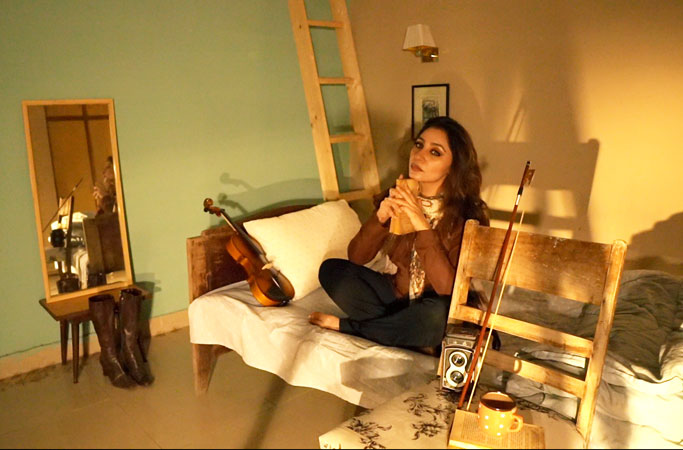 It was my wish to work for the Milli Tarana of Pakistan. Like many others, I am also a patriot and get goose bumps whenever I listen to our national anthem.

About three months back, my documentary on world renowned Pakistani artist and social crusader Jimmy Engineer was released on social media. Dr Zaar watched that and contacted me for his own.

While working on his biography, he talked about his sons Riyan and Isaac and their love for playing tabla on the national anthem of Pakistan. He asked me to develop the idea. We talked about many ideas but Dr Zaar wanted a happy peaceful and enchanting theme. So it came like this. Taking it as my debut instrumental video, I was so anxious about the execution.

The new generation the kids, Riyan and Isaac stood the main inspiration for me. Their parents were so keen to build it as a symbol of Positivity for the whole nation and the whole world as well. We decided to shoot at Minar-e-Pakistan, the Fort, Baradari and mazar of our national poet Allama Iqbal.

Their smiling faces, the innocence and positivity in their gestures were making the old architectural places live again with their beating hands on tabla.

About three months back, my documentary on world renowned Pakistani artist and social crusader Jimmy Engineer was released on social media

This scenario made me capture the 100-year-old gigantic pieces of architecture coming out of their nostalgic nature and blending as the present moment. It looked like smiling with the innocent kids. After agreeing to make the video, I got to know another surprise that Ustadji was creating the tune. Now this made me touch the ground as a gratitude because his presence made everything so professional and in rhythm too.

Along with the catchy rhythm, the gigantic architecture looked sweetened with innocent, cherished kids who beat the tabla drums with their delicate hands spreading the message of Happiness and love to the whole world.

We were short of time shooting the whole day on these locations and so we came up with a raw footage just three days before March 23.

I was so uncomfortable hiring an editor for my debut project as I wanted to carve the piece with my own hands. I was up for all 48 hours to release the video in time. I am really thankful for the support of Mr and Mrs Zaar as they stayed awake till I delivered the video.

They set an example of great hospitality, care and love for the people who work for them.

The project was released on social media but due to its captivating theme, all the television channels including Geo TV, ARY, Express News, City 42, Channel 24 and Dunya News aired it, not once but repeatedly. It was an unforgettable experience to work with lovely kids and their supporting parents and last but not the least with a classical music legend Ustad Rustam Fateh Ali Khan.

I can never thank enough our Almighty Allah for my debut project broadcasted everywhere in Pakistan and also well appreciated.