* The traditional image of the white cowboy whitewashed the actual history of cattle farming, which was first adopted in North America by Mexican vaqueros and was later used by slaves 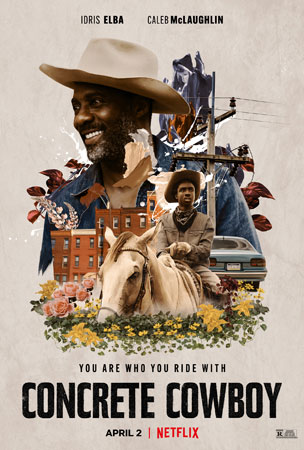 The common narrative of inner-city life, both in Hollywood films and American pop culture as a whole, usually plays out predictably: absentee father, mother on welfare, children turning to drug-dealing or getting shot in the street.

Westerns also have a concrete design in the American imagination, starring John Wayne or some similarly stoic white man on a horse who works alone and determines his own fate.

The traditional image of the white cowboy whitewashed the actual history of cattle farming, which was first adopted in North America by Mexican vaqueros and was later used by slaves and free African-Americans. While a few Black Westerns focus on the migration of freed slaves to the West, including 1972’s Buck and the Preacher and 1997’s Buffalo Soldiers, the Black cowboy tradition and their history of self-determination has mostly been lost to history. In the new Netflix film Concrete Cowboy, first-time writer-director Ricky Staub offers a corrective: an urban Western drama inspired by the real-life Fletcher Street Stables, a North Philadelphia community of Black cowboys that has been around for more than a hundred years.

Authenticity seems to be the through point for Concrete Cowboy, adapted from Greg Neri’s young-adult novel Ghetto Cowboy. Before writing the script, Staub and co-writer/producer Dan Walser spent months learning the history of Fletcher Street Stables and getting to know the Fletcher Street riders, who provide a positive alternative to street life for North Philly kids.

The level of dedication comes through in the film, where the stables are the narrative’s beating heart. The film deftly balances a crowded narrative that includes a father-son reconciliation and a depiction of the dangers of running the streets.

Authenticity seems to be the through point for ‘Concrete Cowboy,’ adapted from Greg Neri’s young-adult novel Ghetto Cowboy. Before writing the script, Staub and co-writer/producer Dan Walser spent months learning the history of Fletcher Street Stables and getting to know the Fletcher Street riders, who provide a positive alternative to street life for North Philly kids

The film begins with troubled 15-year-old Cole waiting for his mother at his school in modern-day Detroit, after being expelled for a fight where he had to be restrained by school police. In a last-ditch effort to keep him on the right path, Cole’s mother drives him to Philly and drops him on the doorstep of his estranged father Harp to stay for the summer. Hard-headed Cole is faced with a horse living in their apartment and a decision: whether to face the harsh discipline of Fletcher Street, or run the streets with his childhood friend Smush

Concrete Cowboy is a visually beautiful film, thanks to cinematographer Minka Farthing-Kohl’s gorgeous outdoor shots and primarily natural lighting. From Cole’s first sunrise in Philly, the movie’s juxtaposition between nature and urban life is stunning, with riders grazing horses in a field surrounded by rundown buildings, and horses tied on hitching posts next to weathered cars, and hosed down on sidewalks in front of the warehouse stables. Even though Fletcher Street is a scene that’s astounding for the average American, the scenes look and feel hyper-realistic.

All of Concrete Cowboy’s performances are solid, with McLaughlin carrying the story emotionally, and Jerome balancing vulnerability and pride as charming, tempting Smush. Orange Is the New Black star Lorraine Toussaint is also a standout as Nessie, the stables’ tough-love matriarch. In addition to the professional actors, the cast also includes members of the Fletcher Street Stables community. Newcomers Ivannah Mercedes and Jamil “Mil” Prattis add warmth and authenticity through their comfort around the horses and in the stable stalls. Fletcher Street members also serve as a type of Greek chorus, commenting on Cole’s acclimation to working in the stables.

Concrete Cowboy’s best scenes involve the stables, as Cole and the others try to care for the horses in spite of their limited financial means. In these scenes that deal with physicality, with mucking stalls and horse races, the camera angles bring the audience in close to see the strain on the bodies of humans and horses alike. The realistic shaky-cam could be a bit steadier at points, but the effect brings the viewers in closer to the scene.

Staub and Walser do spend some time letting the audience know that urban cowboys, specifically the North Philly cowboys, have been around for decades. There are some bits of clunky exposition educating the audience about the whitewashing of Hollywood cowboys, which seem both necessary for those who don’t know and corny for all involved. But when the exposition gets into the history of the Philadelphia stables, the details are fascinating and genuine enough to overcome the awkwardness of exposition.

Not every element of the film holds up. Cliff “Method Man” Smith plays a cop who also came up through the stables, but the tension between his loyalty to the community and his job feels flat and unexplored. Also, with the scenes at the stables having more of an impact than the father-son storyline, there’s a reasonable concern about whether the film would have been more effective as a documentary. The stables themselves are compelling enough that the story could have focused on the grown riders’ histories rather than creating a fictional composite showing how the stables keep boys off the streets.

But that hypothetical doesn’t change the fact that Staub’s film is beautiful. It’s an invitation into a community that has endured for decades and cultivated a freedom that defies its lack of resources or support. It’s also a bold affront to the traditional Hollywood formula that tends towards re-telling tropes such as the white cowboy. It’s refreshing to see a film that fills the gap between the common Western narrative and the untold Western history.