Amitabh Bachchan cracks joke on Anushka and Virat Kohli, says ‘she has a huge apartment’ 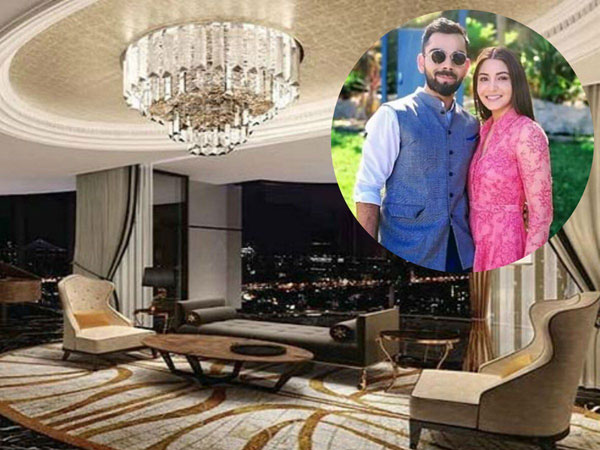 His thoughts have often left netizens in a state of surprise.

On Saturday, the Bollywood superstar took to Instagram and shared a joke on actress Anushka Sharma and his husband and Indian skipper Virat Kohli. However, he made sure to pay his ‘due respects’ to the celebrity couple before cracking his joke on social media.

Big B posted a picture of himself dressed in a colourful sweatshirt as he wrote, ” “Rang abhi tak utara nahin : Aur tyohar ke chutkule band nahi hue. With due respects to Anushka and Virat ..ENGLISH. : Anushka has a huge apartment ! HINDI : Anushka ke paas Virat Kholi hai Courtesy my Ef from my Blog .. AM.”

Virat and Anushka met on the set of an ad shot in 2013 and sparks flew between them. After dating for a few years, the two tied the knot at picturesque Tuscany, Italy on December 11, 2017. Their wedding remained one of the most talked-about events that year. The high-profile wedding solemnised in the presence of family and close friends.

The couple welcomed their first child, a daughter Vamika, in a Mumbai hospital on January 11. Earlier, the couple had requested the paparazzi to not click on the baby pictures and even send out personalised gift hampers.

Earlier this month, Anushka had accompanied her husband and Indian skipper Virat Kohli to Ahmedabad and Pune where the cricketer led the Indian team against England in a series of Test, ODI and T-20 matches. Post their return, Anushka resumed her work and reportedly has started off with a commercial shoot and that’s when her throwback video from 2012, where she spoke about her life after marriage went viral.

The 32-year-old actress had been away from the limelight for the past two years. She was last seen in the movie ‘Zero’, alongside Shah Rukh Khan and Katrina Kaif, which appeared to be a dud on the Box Office. She has two films in the pipeline. She will be seen in ‘Kaneda’, a Navdeep Singh directorial, and a biopic of cricketer Jhulan Goswami.

On the other hand, Amitabh Bachchan-starrer ‘Goodbye’ went on floors recently. The film is directed by Vikas Bahl and also stars South sensation Rashmika Mandanna.