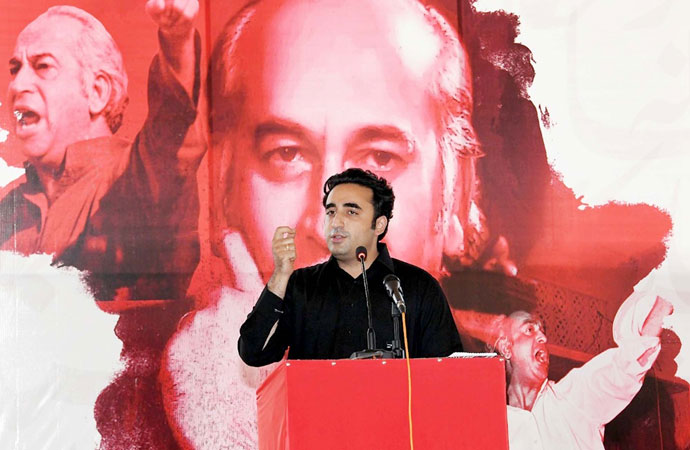 Pakistan Peoples Party (PPP) Chairman Bilawal Bhutto Zardari has made it clear to other opposition parties that his party is ready to go solo in its democratic fight to topple Prime Minister Imran Khan’s government.

“PPP is ready to do opposition either alone or with other opposition parties but one thing is clear that we will not let this selected government to function,” he said on Sunday while addressing a rally held to observe 42nd death anniversary of party founder and former prime minister Zulfikar Ali Bhutto in Larkana.

Serious differences emerged between the parties – both part of an anti-government alliance, the Pakistan Democratic Movement (PDM) – after the PPP appointed its stalwart Yousuf Raza Gilani as Senate’s opposition leader, apparently in violation of what had earlier been agreed upon in a PDM meeting.

Bilawal, in today’s address, said only his party knows how to fight with the government and the establishment both inside and outside the parliament.

“Imran Khan would have secured ‘super majority’ in the upper house of parliament if PDM parties had boycotted the Senate elections,” he maintained.

Due to his party’s ‘smart strategy’, he added, opposition parties were able to defeat the ruling party both in the Senate and in by-elections across the country.

“PPP showed it to its allies how to fight with PM Imran and his selectors after [PDM] defeating them in by-elections and Senate polls.”

On PDM’s decision to postpone the long march, Bilawal expressed regret, saying that “by the time opposition parties reached Islamabad, PM Imran had already left his office”. He also lamented that the anti-government march was made conditional to en masse resignations from all legislative assemblies and added that his party would discuss this matter in the upcoming Central Executive Committee (CEC) meeting.

He expressed wonder over PML-N’s decision to oppose in-house change in Punjab. “I am unable to understand as to why they [PML-N] opposed such a move which could topple the government of Usman Buzdar.”

Bilawal urged the PDM parties to make joint efforts to topple the “selected government” and added that it has become inevitable in the public interest to remove the incumbent rulers. He also lashed out at the PTI-led government for causing ‘unprecedented damage’ to the country’s economy due to its flawed policies.

“The country has been pushed into historic poverty… even during the war times the country’s economy was performing better but today for the first time it entered into a negative territory.” Bilawal said Pakistan’s economy is lagging behind Bangladesh and Afghanistan.