No one can withdraw powers of South Punjab secretariat: FM Qureshi 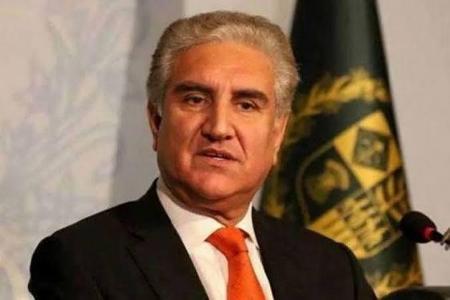 Foreign Minister Makhdoom Shah Mahmood Hussain Qureshi said on Sunday that no one can withdraw powers of South Punjab Secretariat adding that it was the vision of Prime Minister Imran Khan and South Punjab province was part of the party manifesto.

Addressing a press conference here at Raza Hall, FM Qureshi said that the South Punjab secretariat would continue to have powers no matter whether Pakistan Tehreek-e-Insaf remained in power or not.

He said that establishment of the South Punjab Secretariat was not an issue of any individual but a matter concerning the whole population of this area.

He said that those who tried to create hurdles in the South Punjab secretariat would have to face him first.

He said that all members of national and provincial assemblies, ministers and Chief Minister Sardar Usman Buzdar would protect the secretariat.

If everything has to be done in Lahore then why a sum of Rs 4 billion was spent on South Punjab secretariat, he said

He said that PM Imran Khan made the South Punjab province part of the party manifesto under his vision of facilitating people of deprived areas. He said that he himself has discussed notification issues with different officers of the province adding that even IGP Punjab confirmed that powers have been delegated to additional IG South Punjab.

FM Qureshi said he was going to hold a meeting with CM Buzdar on Monday to discuss the matter further and to demand a proper investigation. He said that any conspiracy in the way of establishment of South Punjab province would be defeated. He said that CM Usman Buzdar has formed a committee presided by Provincial Finance Minister Hashim Jawan Bukhat to present recommendations for amendment in rules of business regarding South Punjab province.

Foreign Minister expressed concerns over the ongoing situation in Indian Illegally Occupied Jammu and Kashmir (IIOJ&K) and said that the people of Kashmir and different political parties have already rejected decision of Indian government on 5th August 2019. He said that different international human rights organizations have raised voice against human rights violations in IIOJ&K.

He said that China had good friendly relations with Pakistan for the last many decades.

To a question about a recent environment conference in America in which Pakistan was not invited, FM Qureshi said that American government invited only those countries which were responsible for creating pollution. He said that Prime Minister Imran Khan was a role model for developing countries regarding his efforts to control global warming and environmental pollution. He said that the PM Imran Khan was the only leader who started a billion tree project by taking up the issue of climate change seriously.

“I wrote a letter to the special envoy to Joe Biden administration and former secretary of state of America in which I conveyed that Pakistan and America have the same policy on environment and both countries can work together on the issue” Qureshi added.

To another question, Makdhoom Shah Mahmood Hussain Qureshi said that various signs can be noticed that Maryam Safdar had intentions to go abroad adding that the recent statement of Rana Sanaullah reflects the same. He, however, added that the issue of whether to stay in Pakistan or going abroad would depend on the orders of the court.

Answering yet another question, FM Qureshi said that selection of Syed Yusuf Raza Gilani as Leader of Opposition in the Senate became one of the major reasons in causing division in PDM ranks adding that nine parties of PDM were alleging PPP and ANP were responsible for this division. He said that it was an internal matter of PDM and he would not like to comment. He said, according to nine PDM parties, the matter was controversial. He said, Syed Yousuf Raza Gilani lives in our city and that he would congratulate him after the controversy ends.

Responding to another question, foreign minister said that changes in cabinet was part of the governance adding that Asad Umer was finance minister earlier but now heading another ministry and also shouldering important responsibilities at NCOC now. He said that Hafeez Sheikh would have continued to work as finance minister had he been elected as senator but votes were purchased in senate elections.

To a question about behavior of Pakistani Consulate Jeddah, FM Qureshi said that Jeddah consulate and the employees were the servants of the public not masters. He said that officials have been deployed in consulates for facilitation of Pakistanis abroad and added that strict action would be taken against them in case of public complaints.