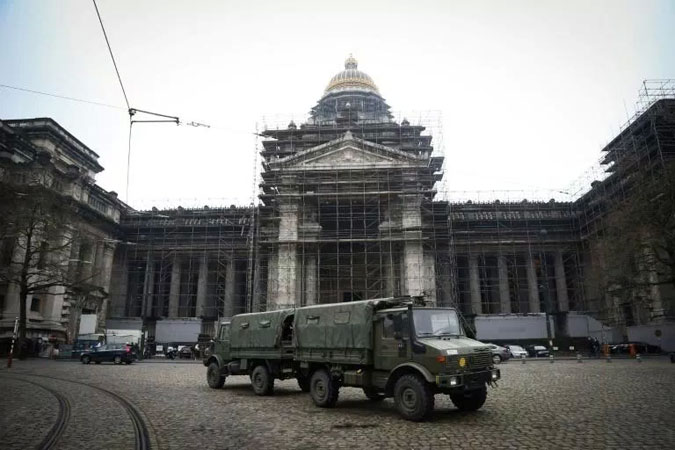 It was once Brussels’ proudest landmark — but after almost four decades encased in scaffolding, the Belgian capital’s Palace of Justice has become a monumental joke.

And the laughter didn’t stop when the federal government revealed that a revived refurbishment plan would begin by reinforcing the ageing scaffolding cage.

Belgian architect Joseph Poelaert’s building, which houses several of the country’s top courts, has awed visitors since the 1860s. It became a Brussels icon in pop art like the graphic novels of Francois Schuiten.

But since the endless refurbishment began, the building’s damp hallways, collapsing ceilings, graffiti-smeared facade and toxic fungi have become an embarrassment.

The nation of Belgium will mark its 200th anniversary in 2030 and by then, promises government minister Mathieu Michel, the Palace of Justice will be restored.

A budget of 87 million euros ($102 million) has been set aside, while a plan has been drawn up to renovate the facade and secure and insulate 1,500 windows, he told AFP.

Constructed from 1866 onwards when Belgium was an industrial power, the palace has a neo-Classical edifice topped by a vast copper-clad dome, and is bigger than St Peter’s Basilica in Rome.

Belgium’s highest court, the Court of Cassation, is among those housed in the building — and for the court’s president Jean de Codt, the palace remains an “absolutely extraordinary work of art”.

The senior magistrate has worked in its halls since 1986 and still sees the palace, despite the scaffolding and the damp, as a symbol of a “strong and independent judicial system”.

But, as he showed AFP around the building, it was clear that there is also anger that the physical heart of that system has been allowed to suffer so much.

There are water leaks. Plaster has fallen from ceilings. Broken windows are not replaced.

It looks bad, and it’s not safe. De Codt himself recounts how he himself fractured an elbow slipping on a flooded marble floor in the Court of Cassation.

The roof guttering is inadequate for a building that covers 26,000 square metres (6.4 acres) of prime real estate on a hill in rainy Brussels.

The basement evidence lockers, where items from thousands of Belgium’s historic trials are stored, have been sealed off because of fungal dry rot.

“We found a sagging area in a corridor. If we walked along it we could fall through and end up one floor below,” said Nathalie Minnen, a court registrar.