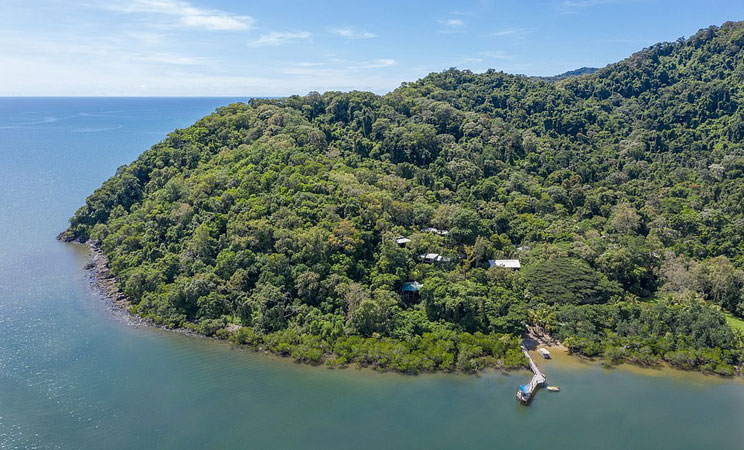 As far as ‘location, location, location’ goes, this extraordinary property has it all – and it could be yours. Bloomfield Lodge – a former Forbes Magazine ‘World’s Best Remote Hotel’ – is nestled amid lush Queensland rainforest and next door to the azure waters of the Coral Sea and the Great Barrier Reef. Access is possible by sea – it has a private pier – via helicopter to a dedicated helipad or by air to an exclusive-use airport.

The current owner of the Cape Tribulation property is Trailfinders founder Mike Gooley, but the travel pioneer has decided to put it on the market and it’s now being auctioned by Sotheby’s International Realty.

The former SAS officer bought the lodge in 1990, invested over AUS$20million in it – and turned it into a world-class eco-retreat. 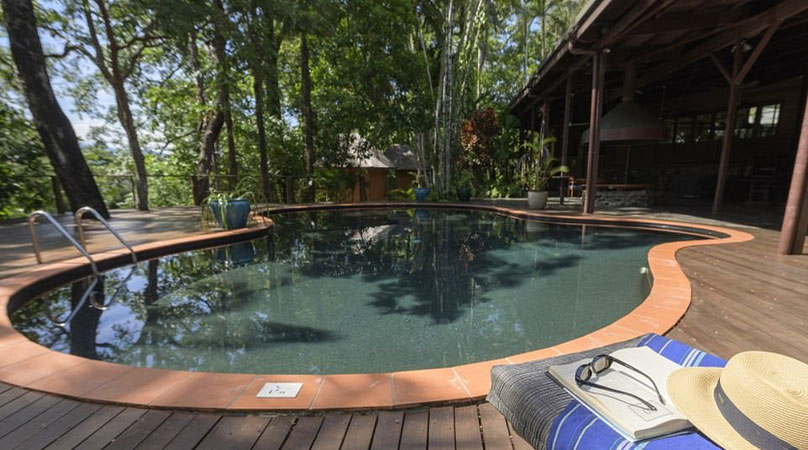 The listing says: ‘Nuzzled into the ancient rainforest are 18 guest suites, each with postcard views across the crystal-clear waters of the Coral Sea and to the mountain ranges. Guests’ amenities include a swimming pool, nature trails, games room, fitness centre, day spa, gazebo spa, a library chocked full of regional historical memorabilia and an alfresco restaurant and bar.’

Sotheby’s says that the new owner might like to reopen the celebrated resort, or ‘retain it as an ultra-exclusive getaway for private indulgence’.

For a decade, explains the auction company, Bloomfield Lodge operated successfully under the banner of Small Luxury Hotels of the World, ‘attracting an international clientele who travelled across the globe to reach their holiday destination’. Unsurprisingly, it was also a popular destination for Australian travellers.

A source told MailOnline Travel that Mr Gooley, who founded Trailfinders in 1970, ran the lodge along mixed-used lines, renting out a few lodges but always keeping some free for friends and family.

Sotheby’s adds that the area is ‘rich in historic and cultural significance’, with Weary Bay named by Captain James Cook and his men, who ran aground there in 1770.

They rowed ashore from Endeavour Reef, where they’d become stuck, to establish if the Bloomfield River was a suitable site to carry out repairs.

Last year, Trailfinders was crowned Holiday Provider of the Year by consumer choice brand Which?

Which? said it had cherry-picked Trailfinders for the award as a result of the company’s ‘stellar response to customers impacted by the fallout from Covid-19’.

In 2019, the company took the title of Travel Brand of the Year.

It was also ranked number one in Which?’s annual Package Holiday Provider Rankings in July 2020.