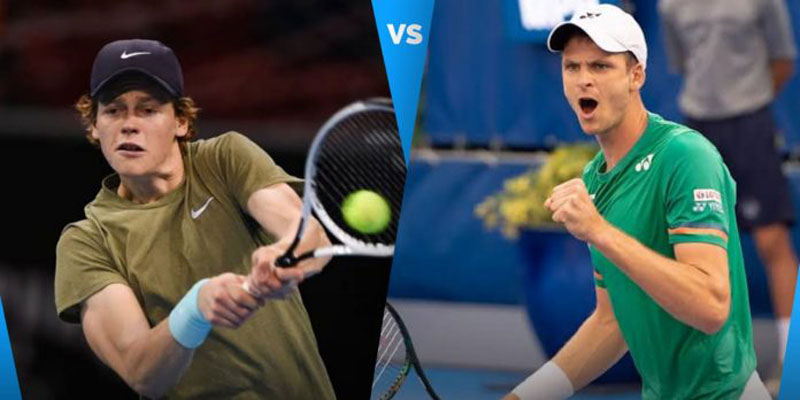 MIAMI: Italian teen Jannik Sinner rallied past Spanish seventh seed Roberto Bautista Agut at the Miami Open on Friday to book a meeting with Hubert Hurkacz in the biggest final of his young career. Sinner, who reached last year’s French Open quarter-finals, defeated Bautista 5-7, 6-4, 6-4 to become only the fourth teen to reach the men’s final in the 36-year history of the ATP Miami Masters. Poland’s Hurkacz, seeded 26th, won his second straight match over a top 10 player, beating Russian fourth seed Andrey Rublev 6-3, 6-4. Coming off a quarter-final win over second-seeded Stefanos Tsitsipas, Hurkacz became the first player to take a set off Rublev at the tournament. It’s the first time he has earned two top 10 wins in the same tournament.

Sinner, 19 and playing only his third Masters 1000, joined 1990 champion Andre Agassi, 2005 runner-up Rafael Nadal and 2007 winner Novak Djokovic as Miami teen finalists. “Today we both showed great tennis,” Sinner said. “It was not easy. It was a little bit windy as well. I’m very happy about my performance today.” Sinner took his eighth career triumph over a top-20 rival and ensured he will rise into the ATP’s top 25 next week, although he nearly smashed a racquet in a tense second set. Sinner seeks his third career ATP title after last year at Sofia and February in an Australian Open tuneup at Melbourne. As excited as he was at reaching the final, he kept a long-term perspective about what it meant for his career. Bautista, who ousted Russian top seed Daniil Medvedev in the quarter-finals, missed out on his second career ATP Masters 1000 final after 2016 at Shanghai, where he lost to Britain’s Andy Murray.

Keeping it simple: Bautista broke Sinner to open then saved two break points and held for a 2-0 lead. But Sinner broke back at love in the sixth game to level at 3-3. The Spaniard broke again for 6-5 when Sinner netted a backhand and he held to claim the set on his second ace after 51 minutes. In the second set, Sinner saved four break points in the seventh game to hold but sent a backhand wide on his first break chance in the eighth games as Bautista held for 4-4. Sinner held and then broke when the Spaniard netted a backhand to force a third set. Bautista broke at love for a 2-1 lead in the deciding set, but Sinner roared back to claim the victory and ensure himself a place in next week’s ATP top 25.

Hurkacz, who already has one victory this season in Delray Beach in January, advanced to the first Masters 1000 final of his career. “After winning a title at the beginning of the year I had a couple of rough matches,” Hurkacz said. “I have just been trying to improve my game. Hurkacz hammered eight aces and broke Rublev’s serve three times while being broken just once
in their one hour, 27 minute match.

Besides dominating on the serve, Hurkacz struck more backhand winners than the Russian. “He played a couple of amazing shots,” Hurkacz said of Rublev. “I was able to play to his backhand to get advantages on the rallies.” Rublev fought to stay alive in the opening set before Hurkacz finished it off with a powerful serve on the sixth set point. In the second set, Hurkacz clinched the win on his third match point, blasting a cross court forward winner that froze Rublev in his tracks. Hurkacz and Sinner are doubles teammates so they know each other’s games well. “It is going to be a fun match,” Hurkacz said.