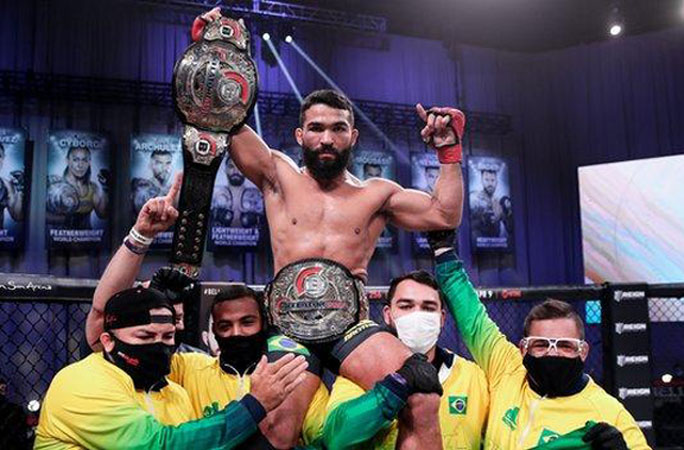 MOHEGAN SUN: Two-division Bellator champion Patricio ‘Pitbull’ Freire produced a clinical performance to retain his 145-pound title and move into the final of the $1million featherweight grand prix at Mohegan Sun, Connecticut on Friday night. Freire, 33, who holds Bellator’s titles at both featherweight and lightweight, showcased his punch power, then his grappling skills, to defeat American contender Emmanuel Sanchez via first-round technical submission in the main event of Bellator 255 – claiming a record 20th win under the Bellator banner. The bout also formed the second semi-final of the promotion’s featherweight world grand prix, with the Brazilian moving on to the finale where he will take on undefeated American contender AJ McKee for the undisputed title and prize of $1million (£723,000).

Freire had already defeated Sanchez via unanimous decision in an earlier title clash at Bellator 209 in Tel Aviv, Israel, back in November 2018. But, in the rematch at the Mohegan Sun Arena in Uncasville, Connecticut, the Brazilian made his punch power pay as he connected with a big left hand that dropped his man to the canvas midway through the opening round. With Sanchez stunned, the champion followed his man to the mat and locked up a guillotine choke that rendered the challenger unconscious at the 3:35 mark. It gave Pitbull a record 20th victory inside the Bellator cage, and his 32nd career win overall. It was also the first time that Sanchez had been finished in his 25-fight career. Reflecting on the guillotine choke that earned him his seventh consecutive victory, Freire said: “It’s like a normal movement for me, it’s [in] my veins. It’s Brazilian jiu-jitsu. That’s a position I love very much. So he was there, I saw his neck, and that’s that.” After the fight, Freire and McKee exchanged heated words as they faced off ahead of the grand prix final later this year. McKee, 25, has a perfect 17-0 record, and has made no secret of his desire to defeat Pitbull twice to claim both the featherweight and lightweight titles. “I told him, I’m bringing that leash and a kennel, and I’m ready to take him to the pound!” he declared.