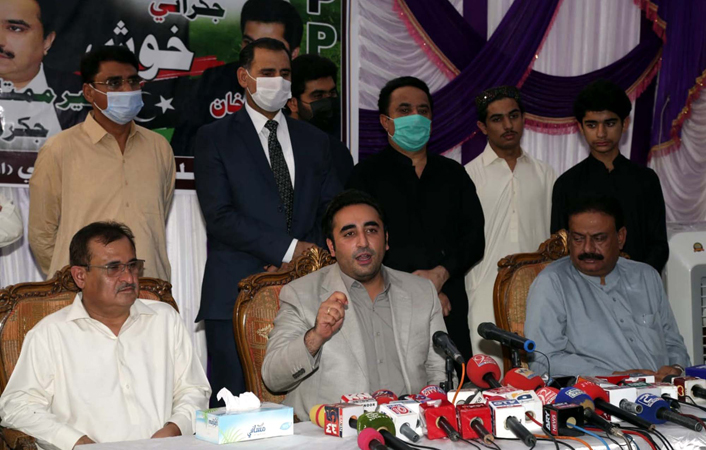 PPP Chairman Bilawal Bhutto-Zardari Friday said that his party plans to move court against what he called an illegal ordinance brought to give ‘autonomy’ to the State Bank of Pakistan.

“The PTI government is making use of every tactic with which it can impose its policies […] now we have heard it is not only the decision to make State Bank independent, they wish to bring about other economic decisions through ordinances which will be an attack on the parliament,” Bilawal said while addressing a press conference in Jacobabad after meeting local PPP leaders and workers. “We have seen they are handing over our government to the IMF. And the illegal ordinance brought for the State Bank, will leave it unanswerable to the Pakistan constitution or law […] it will only dance to the IMF’s tunes,” he said. “And if this happens it will be a historic attack on the economic sovereignty of Pakistan,” he added.

Bilawal said his party will challenge the SBP ordinance. “We will not only challenge this in the parliament, but we believe it to be so illegal, we will approach the court,” he said, adding that only the National Assembly has the power to pass the money bill. “We will not allow Pakistan to be at the mercy of this PTIMF government,” Bilawal said.

He said that the government has put the country in a precarious position with a dwindling economy on the one hand and a pandemic to conquer on the other. “We are wholly unprepared to combat the third wave that we are witnessing because our federal government is stubbornly refusing to procure vaccines for all Pakistanis,” he said.

Speaking about the recent tensions between the PPP and the PML-N, Bilawal said that his party will soon convene a meeting to discuss the matter. He said many people from the party had advised him that history has shown the two parties did not get along and it will be a tough nut to crack. “It has been my effort, however, over the last three years, for us to work together with all parties for the benefit of democracy. I will put forth the same point in the CEC meeting […] we do not want this government to benefit out of any infighting between opposition parties,” Bilawal said.

He said that it was a “great victory” with the PDM dealing the government a defeat for the first time in the last three years. “And there can be no greater defeat, than the prime minister losing in his own constituency,” the PPP chairman said, referring to Yousaf Raza Gilani winning the Islamabad Senate seat, with the government candidate Abdul Hafeez Shaikh losing by a margin of six votes.

“It would have been in the interest of PDM and democracy to have focused more on this victory and taken it forward to give this regime a tough time, so that the people who are suffering, can see that the opposition is at least united in the view that the government has to go and a true representative of the people brought,” he said.

He wished JUI-F and PDM chief, Maulana Fazlur Rehman, as well as PML-N Vice President Maryam Nawaz, both of whom were reported to have taken ill, a speedy recovery.

Bilawal said he does not wish to comment on his ties with Maryam – which he insisted are still ‘good’ – lest some remark of his affects the situation. He added that he does not think Fazlur Rehman is cross with anyone, or that he would show preference to one party over the other.

Bilawal called on Election Commission of Pakistan to play its role as a free, independent institution to ensure that elections all across Pakistan, not just in Punjab, are held fairly. “If this is ensured, I am confident our Jacobabad candidate contesting for the National Assembly seat will be declared a winner the next day,” he said.