The Absolute Book is an instant classic

* When Taryn Cornick is still a teenager, her older sister Beatrice is killed in a hit-and-run 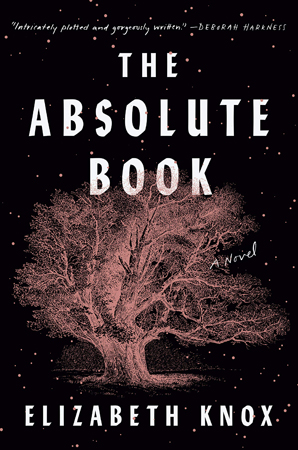 Elizabeth Knox is the recipient of a multitude of literary honours in her native New Zealand, with the kind of popular following that befits the luminous quality of her writing.

That international success has thus far been denied her is something of a scandal, but with her latest work the tide could be about to turn. The Absolute Book has the feel of an instant classic, a work to rank alongside other modern masterpieces of fantasy such as Philip Pullman’s His Dark Materials series or Susanna Clarke’s Jonathan Strange and Mr Norrell.

When Taryn Cornick is still a teenager, her older sister Beatrice is killed in a hit-and-run. The perpetrator, Timothy Webber, is sentenced to six years in jail; Taryn remains convinced that her sister’s death was not an accident, but murder. Soon after his release, Beatrice’s killer is found dead in a ditch not far from the site of the original accident. Someone is stalking Taryn – plaguing her with silent phone calls – and when a police detective, Jacob Berger, turns up on her doorstep asking questions about the death of Timothy Webber, Taryn suggests that Berger should stop bothering her and look for the stalker instead. But Berger senses there must be a connection between Webber’s death and Taryn’s silence, and his memories of the original crime leave him unwilling to let the matter drop.

Meanwhile, a missing witness to Beatrice’s death has finally resurfaced. His name is Shift and he is not quite human. He explains to Taryn that the world she knows is not the only world and that the equilibrium between human reality and the fairy realm is becoming unstable

Meanwhile, a missing witness to Beatrice’s death has finally resurfaced. His name is Shift and he is not quite human. He explains to Taryn that the world she knows is not the only world and that the equilibrium between human reality and the fairy realm is becoming unstable. The rupture is centred on an object, a wooden casket containing a book known as the Firestarter due to its habit of surviving disastrous and often inexplicable library fires. Shift insists that Taryn alone holds the key to its whereabouts, that a long-ago blaze in her grandfather’s library was no accident, but an attempt by the forces of darkness to smoke out the casket. As she is drawn into an adventure of trans-dimensional magnitude, Taryn comes increasingly to suspect that her sister’s death was collateral damage in a secret war for possession of the casket’s contents.

As the author of a history of book-burning, Taryn Cornick is something of an expert on the subject, and it is books, more than anything, that form the beating heart of The Absolute Book. This is a text that seethes with literary allusions: classics of ancient literature, fairy stories, crime capers, philosophical treatises and radical polemics, novels of manners and revenge, heroic quests and big books-about-books such as The Shadow of the Wind, The Da Vinci Code, Night Train to Lisbon and The Saragossa Manuscript – “arcane thrillers”, as Knox has called them.

The Absolute Book is a tongue-in-cheek homage to these overblown literary detective stories as well as a triumph of literary fantasy, and this knowing, feisty, humorous contribution to the genre is a hefty piece of work. There is a lot to keep track of here, not only in terms of characters but in terms of worlds. As Taryn, Shift and Berger duck and dive between realities they encounter demons, fairy folk, the semi-immortal hybrids known as the Taken, human souls in Purgatory and godly entities in avian form. The strands of real-world myth, folklore and fairytale from which Knox weaves the philosophical rationale behind what is in its appearance and mechanics a classic portal fantasy are as richly diverse as her characters, revealing a fluent knowledge of her predecessors as well as a solidly practical grasp of magical storytelling.

Fantastic literature is often decried for being escapist, and while the currently burgeoning epic fantasy market might stand as evidence that traditional sword-and-sorcery is alive and well, a book like Knox’s offers the assurance that a more forward-thinking, experimental strand of fantasy is possible and thriving. The greatest fantasies have always held up a mirror to quotidian reality and it is to this politically engaged, reality-critical, Swiftian strand that The Absolute Book belongs.

Part of the problem of derivative fantasy is the underlying sense that the stakes are disappointingly low – that because anything is possible, nothing matters. The Absolute Book, by contrast, is dark, difficult and ambiguous. While Knox is generous and playful in the worlds she creates – the gorgeously decadent invention of her fairy realm offers enough detail, delight and internal consistency to please even the most devout Tolkienite – her purpose lies in revealing the limits of enchantment and the moral danger inherent in allowing ourselves to be seduced by easy narratives of power and entitlement.

There is a genuine feeling of jeopardy and Knox shows consummate skill in weaving together the mimetic and the fantastic; with its surveillance drones, server farms, mobile phones, police procedure and celebrity culture, The Absolute Book is a 21st-century narrative whose social and political ills are not simply topical background but central concerns.

It is no accident that Princes Gate – the home of Taryn’s grandparents and the “lost domain” of the childhood she shared with Beatrice – is situated in the Welsh Marches, the fuzzy borderland of Arthurian legend, birthplace of the grandfather of weird fiction, Arthur Machen. Whereas Machen’s fairy world is terrifyingly dark and essentially unknowable, Knox’s recalls the interlinked time-streams and multiverses conjured by Alan Garner in The Owl Service or Susan Cooper in The Dark Is Rising, two classic modern fantasies that base their action amid the landscapes of Celtic mythology and share a similarly vivid sense of the uncanny.

The Absolute Book is everything fantasy should be: original, magical, well read. Its language is assured, lyrical yet never overwrought, and in its surprising twists of fate, its deft characterisation and constant forward momentum, it is both accessible and compelling. At 600-plus pages, a book makes demands on the reader simply at the level of how much time they are prepared to devote to it. Yet that very ambition, the sweep and heft of its ideas, ensure that effort expended is amply rewarded.

“Jacob was tired and a little nostalgic for the surety of his own wounded pride,” Knox tells us of her sceptical policeman, Berger. “But wasn’t what was happening to him now the kind of change he’d been waiting for his whole life?” Thus Knox invites us to open our minds to the possibilities that fantasy offers. The daring complexity of her art confirms that reading is itself an act of the imagination worth investing in.

The Absolute Book is epic, action-packed fantasy in which hidden treasures are recovered, wicked things resurface, birds can talk, and dead sisters are a living force. It is a book of journeys and returns, from contemporary England to Auckland, New Zealand; from a magical fairyland to Purgatory.