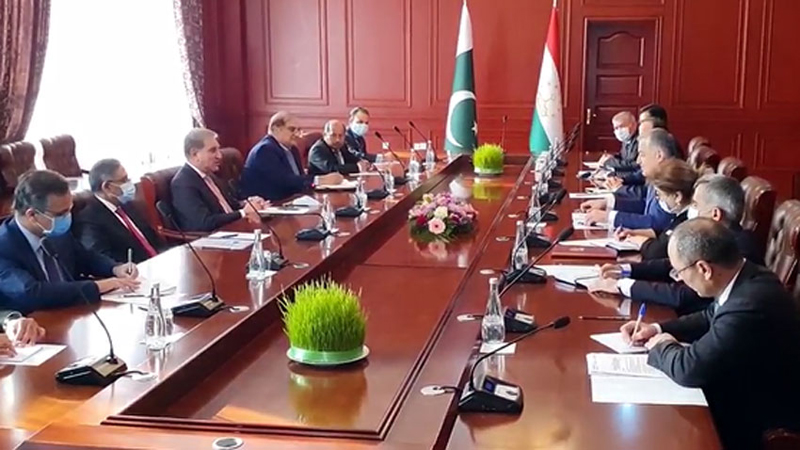 Pakistan and Tajikistan have agreed to further promote their economic and trade relations.

The understanding came at delegation level talks between the two countries in Dushanbe on Wednesday, said a press statement.

Later addressing a joint news conference along with the Tajik counterpart, Foreign Minister Shah Mahmood Qureshi said that both the sides have agreed to reactivate joint working groups to promote cooperation in different fields.

Shah Mahmood Qureshi said there are a lot of opportunities for enhancing bilateral trade and investments between the two countries. “We need to encourage our entrepreneurs and businessmen to visit each other and explore the opportunities of cooperation,” said Qureshi. He said that Pakistan will extend maximum facilitation to the businessmen from Tajikistan.

Expressing satisfaction over the defence cooperation, the foreign minister said that Pakistan is ready to further assist Tajikistan build its military capabilities. He said, “We welcome more officers from Tajikistan into the military institutions and foreign service academy of Pakistan.”

The foreign minister said that both the countries have significantly enhanced their relations and this trajectory must be maintained.

Qureshi expressed commitment to CASA-1000 project, saying Pakistan desires its timely completion. He said the project will benefit the region. He also extended an invitation to the Tajik President and the Foreign Minister to visit Pakistan.

Earlier in the meeting with his Tajik counterpart Sirajuddin Mehruddin, Qureshi invited Tajikistan to benefit from Pakistan’s Gwadar port as the shortest trade route to Southeast Asia, Middle East and Africa. He emphasised on tapping the immense trade potential existing between the two countries.

He congratulated the Tajik foreign minister on the successful hosting of 9th Heart of Asia Istanbul Process Conference.

The two foreign ministers expressed satisfaction over the nature of bilateral relations and reiterated their commitment to further strengthen it.

Both stressed the need to strengthen and activate institutional mechanisms between their governments, such as Joint Ministerial Commission and Joint Working Groups.

The two sides hoped that the holding of the fifth Bilateral Political Consultative Meeting between Pakistan and Tajikistan would pave the way for the promotion of cooperation between the two countries in various fields.

Earlier, the two foreign ministers led delegation-level talks between their respective delegations that focused on various issues of mutual interest including bilateral relations and bilateral cooperation in diverse fields.

He was talking to Foreign Minister Shah Mahmood Qureshi in Dushanbe on Wednesday. The Tajik President expressed satisfaction over the nature of bilateral cooperation between the two countries.

Qureshi said there are a lot of opportunities for expanding relations between the two countries in different fields including trade. He noted that the early completion of CASA 1000 project will prove to be instrumental for establishment of energy corridor amongst the South and Central Asian states.

On the occasion, they also discussed the regional security situation including the Afghan peace process. The foreign minister said that Pakistan will continue its sincere efforts for peace in Afghanistan.