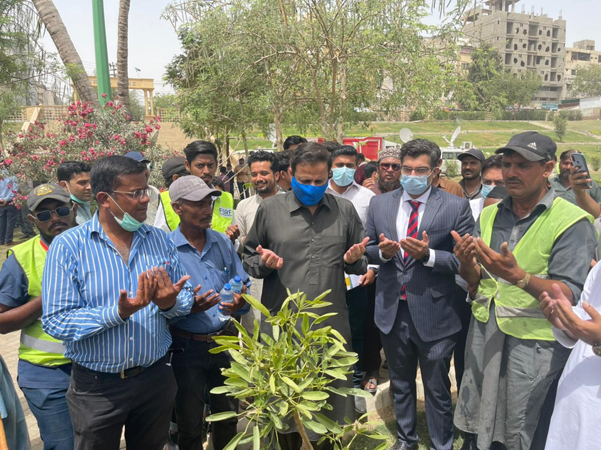 Sindh Government Spokesperson and Adviser for Law, Environment & Coastal Development Barrister Murtaza Wahab on Tuesday said Sindh government has launched a tree planting campaign across the province and we will work with the people to make Sindh province green.

Talking to the media persons on the occasion of planting trees in Jheel Park under the Sindh Government’s tree planting drive, Murtaza Wahab said “It is our common responsibility to provide a healthy and conducive environment for future generations and everyone must plant plants realizing this responsibility.”

Murtaza Wahab was also accompanied by DG Parks and other concerned officers on the occasion.

The Spokesperson said that and under the Urban Forest project Sindh government is constructing this project in two parts.

He said that in the past all the parks were filled with Korno. We are also currently planting orange and papaya trees, in which KMC is building the park in a public-private partnership, said Wahab.

“We do not have the representation of the area where we stand at the moment, but we are working without discrimination,” he said. We promise to give green cover to our citizens. Everyone needs shade for themselves.

In response to a question, he said that it is illegal to cut mangroves and if anyone is identified, legal action will be taken.

Later, Sindh government Spokesperson in reference to the reshuffle in the federal cabinet said first Nadeem Babar and now Hafeez Sheikh were disgraced and removed. The seeds of criticism that we sowed are now bearing fruit.

He further said that the real salvation was the resignation of the man who created the sugar and wheat crisis which made the government’s economic policy look weak. The person who was getting Pakistan involved in the bone market was removed, he added.

“We had sought permission from the federation to order the vaccine, to which the response was delayed and it was asked to let the federal government do it,” he said. There is only one solution to the problem of 22 crore people of Pakistan, and that is to go to Imran Khan’s house.

Meanwhile Wahab said “Jamaat-e-Islami is following its ideology and we are following our own ideology but we will work together for the public interest, since Imran Khan is responsible for all the failures.” It is not possible for the cabinet to be incompetent and the head to be fine. NAB should also look at the performance of the ministers” he added.