Ronaldo’s armband to be auctioned to help suffering baby 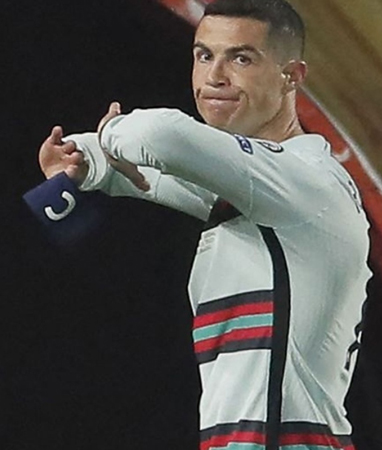 LONDON: The Portugal captain’s armband which Cristiano Ronaldo slammed into the ground after his apparent winning goal was disallowed in a World Cup qualifier against Serbia was put up for auction on Tuesday. A charity group which is trying to collect money for the surgery of a six-month-old boy from Serbia with spinal muscular atrophy got the armband from a stadium worker who picked it up after the match ended in a 2-2 draw on Saturday in Belgrade. The group said the blue armband with the letter C will be in an online auction for three days. Ronaldo walked off the field moments before the final whistle after his injury-time goal was not allowed by officials. The Juventus player dinked the ball over the Serbia goalkeeper and it apparently crossed the line before being cleared by an opposing defender. While heading straight into the dressing room before the final whistle, Ronaldo angrily threw down his captain armband near the touchline. Ronaldo was publicly criticised for the action and some believe his angry display could lead to Fifa sanctions if the governing body deems his reaction to be offensive or violent conduct.