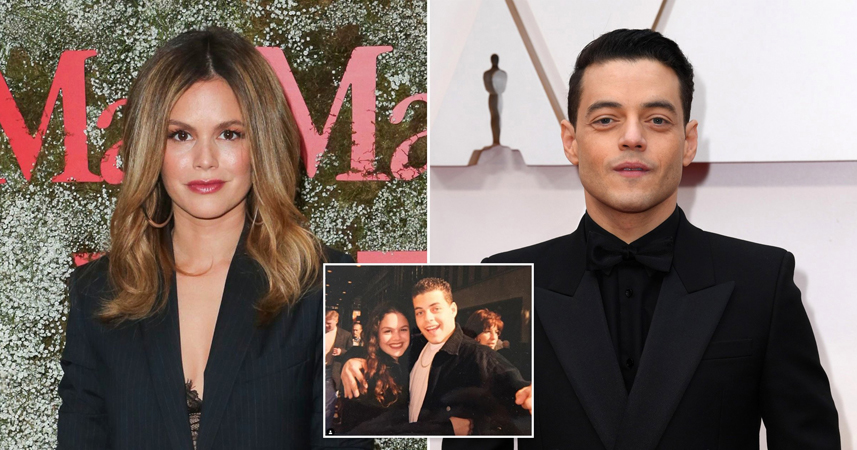 Oh, snap! Rachel Bilson is spilling the tea on her interesting interaction with her former classmate and fellow Hollywood star, Rami Malek.

While speaking on Dax Shepard and Monica Padman’s Armchair Expert podcast on Monday, March 29, The OC actress opened up about the time the Oscar winner asked her to delete their high school photo off of Instagram.

Hint: The Take Two actress revealed she “was just a little bummed at how it was handled.”

For a refresher, in February 2019, Rachel posted an epic throwback image of her and Rami looking elated to be in New York City when they were teenagers. At the time, she jokingly commented on his ’90s fashion and wrote, “Hey @ramimalek where’d you get that gold chain? #tbt #oscarworthy #dontforgetthelittlepeople.”

But according to the Hart of Dixie star, the 39-year-old actor wasn’t in the mood to take a walk down memory lane.

Before diving into the details, Rachel shared some backstory on their past friendship, as they both attended Notre Dame High School in Sherman Oaks, Calif.

For a refresher, in February 2019, Rachel posted an epic throwback image of her and Rami looking elated to be in New York City when they were teenagers. At the time, she jokingly commented on his ’90s fashion and wrote, ‘Hey @ramimalek where’d you get that gold chain?’

“Rami was a good friend of mine,” she told Dax. “We were the same crew. We did the Crucible together senior year; we were the leads in it together-all these things.”

She then explained that she wanted to celebrate his success with something light-hearted. At the time, Rami swept the Oscars, SAG Awards and Golden Globes for his portrayal of the late singer Freddie Mercury in Bohemian Rhapsody.

“Obviously, he gets super famous and he’s always been extremely talented…even in high school,” she continued. “I had posted a throwback of us from our senior trip to New York. We’re super nerdy…just the dorkiest picture of the both of us. But I throw it up, ’cause it’s funny and I think it’s so important to be able to make fun of yourself.”

But after sharing the throwback image, the 39-year-old star said Rami reached out to her directly. However, it wasn’t what she expected.

As she recalled, “I don’t usually check my DM’s on my Instagram…maybe a week goes by and I actually look and I have a message from Rami. But it wasn’t like, ‘Hey! How are you?!’ It was straight to: ‘I would really appreciate if you take that down. I’m a really private person.'”

According to Rachel, the Mr Robot star “didn’t like the picture of himself.”

“I’m friends with his stylist and she was like, ‘Well it’s not a great picture of him,'” Rachel said, while also sharing another interaction she with The OC creator. “It was right before the Oscars and I remember Josh Schwartz being like, ‘You did him dirty. He’s about to be nominated.'”

“I was like, I guess I should’ve found something more flattering,” the actress recalled thinking. “But I removed it and I even wrote to him a really nice message: ‘I’m so sorry. Go get the Oscar! You’re doing amazing.’ And I never hear anything back, which is fine. But I was super bummed because he was always so nice and we were good friends.”

Interestingly enough, Rachel and Rami aren’t the only household names to graduate from Notre Dame High School. In January 2019, Katharine McPhee posted a rare photo of her and Meghan Markle looking glam ahead of their school musical.