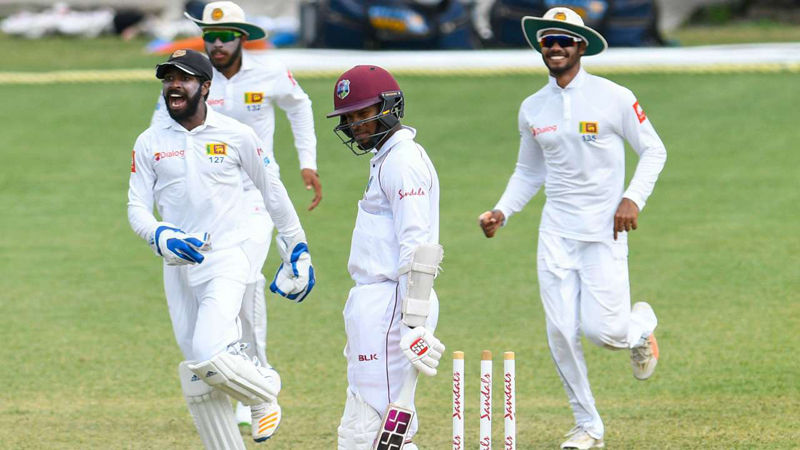 ANTIGUA: After a first Test that had started with a patented Sri Lankan batting collapse that almost anyone who had been watching them play cricket over the past few years could have predicted, here we are somehow entertaining the very real possibility of them securing a first ever Test series win in the Caribbean. Now, of course, for this to actually transpire, it would require Sri Lanka to replicate, and most likely better, their performance from the previous week –– certainly no little ask, but one considerably less farfetched than it might have been at the same point last week.

Much of this optimism is down to, as is now almost their trademark, some previously unheralded player from their fractured domestic system beating the odds to spark the team into life. This time it was Pathum Nissanka with a magnificent century on debut. Against South Africa a few years back, while Kusal Perera will always be the highlight, it’s easy to forget the resilience brought to that middle order by debutant Oshada Fernando. And then a couple of years before that, when Sri Lanka famously beat Australia at home, it was none other than the green pairing of Dhananjaya de Silva and Kusal Mendis who breathed life into the side.

But on all those previous occasions, the team failed to build on the exuberance injected by fresh blood. Will Nissanka’s entry into the side be met with similar regression? Well we’ll soon find out. As for the West Indies, after the relative ease with which the visitors had been dispatched in the limited-overs series, the trouble the Sri Lankan batsmen had had in the warm-up game ahead of the first Test, and then that first innings collapse, it might have come as a fair shock when they found themselves having to bat out the last day of the Test just to avoid defeat. But this West Indian side doesn’t cower from adversity all that easily ––- as underscored so sensationally in Bangladesh earlier this year –– and the first Test would have provided them with all the evidence they need to know that they have the tools to hurt this Sri Lanka side. So in many ways, with the match being played at the same venue, this is simply a continuation of proceedings from that first game. And with seemingly not much to separate both sides, once more, victory will depend largely on which side makes the fewer mistakes.

Pathum Nissanka is not the first ––- and he certainly won’t be the last –– debutant to reignite cricketing interest from an increasingly apathetic Sri Lankan fanbase. But that doesn’t make it any less exciting. Sure, he may not have the flair of a Kusal Mendis, or the explosiveness of an Avishka Fernando, but in a side that has been crying out for a steadying presence, Nissanka’s bloodymindedness and ability to simply occupy the crease – a feat that many around him seemed to struggle with –– might as well make him the next coming of Sanath Jayasuriya at this point.

But if Nissanka is the proverbial immovable object, then in Kemar Roach the West Indies possess the unstoppable force – well, at least when it comes to cricket played at North Sound in Antigua. With 36 wickets in six matches at an average 15.77, it’s safe to say Roach likes playing here. In the first Test, the Sri Lankan batsmen struggled to get him away; if he gets more support from the sometimes wayward pair of Shannon Gabriel and Alzari Joseph, then it could be another very testing outing for the visitors.

It wouldn’t be surprising if Dinesh Chandimal finds himself the odd man out after a poor display in the first game. In which case Sri Lanka could stump for one of Ramesh Mendis or Roshen Silva, both with a lot of domestic runs under their belts but the former also capable of some part-time off-breaks. Sri Lanka also found themselves with a fairly long tail, and if they choose to address that, Wanindu Hasaranga could find his way into the team ahead of Lasith Embuldeniya. Aside from that, there could also be promotion up the order for Nissanka, who opens in domestic cricket. The West Indies will have been quite happy with their overall performance from the first Test, and so will not want to change up too much. Shannon Gabriel was relatively disappointing but he will likely be backed to put forward an improved showing.