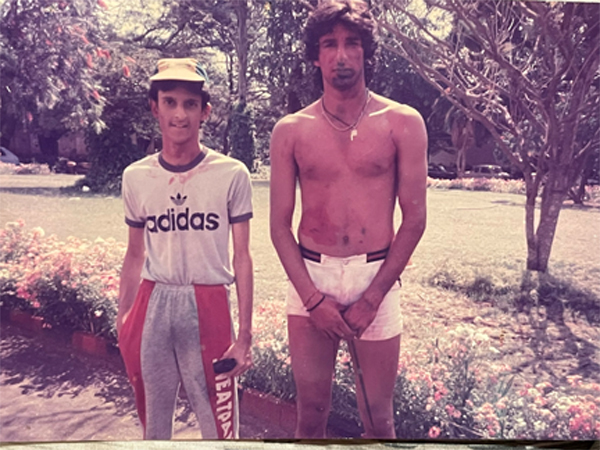 LAHORE: Fans of cricket in both India and Pakistan recall a time when relations were not that frosty between the two nuclear-armed nations and cricket teams frequented each other’s countries quite often. These same memories were ignited once again when a picture of former Pakistan speedster Wasim Akram went viral on Twitter. Shared by an Indian presenter, the picture features a shirtless Wasim Akram standing beside Gautam Bhimani, with the tweet suggesting the Pakistan players had earlier played Holi with the Indian team. Pakistan toured India in 1987 to play five Test matches and six one-day internationals. The Men In Green won the Test series 1-0 after they were victorious by 16 runs in the final match of the series, the previous four games having been drawn.

Indian sports presenter Gautam Bhimani, sharing the throwback photo, said: “My favourite cricketing #Holi memory! The Indian and Pakistani teams playing Holi in the pool of @TajWestEnd Also the first time I met @wasimakramlive.” Wasim responded to the tweet, fondly recalling the memories: “Happy Holi. What a day that was 87 tour of India.” Fans of cricket from both countries were elated to see the photo, with several lamenting the two sides not having played a bilateral series in the recent past. Another user said from playing Holi, we went to not even knowing each other anymore. A cricket enthusiast said he felt “cheated” when all sorts of relations were more or less intact but cricket. A user hoped that peace would prevail between the two nations so the citizens could see such beautiful moments again. Poking fun at the presenter, a user said Akram would never forgive him for sharing the former pacer’s photo. To which, Bhimani said that he had taken Akram’s approval. In the end, a “classic” gif does it all.