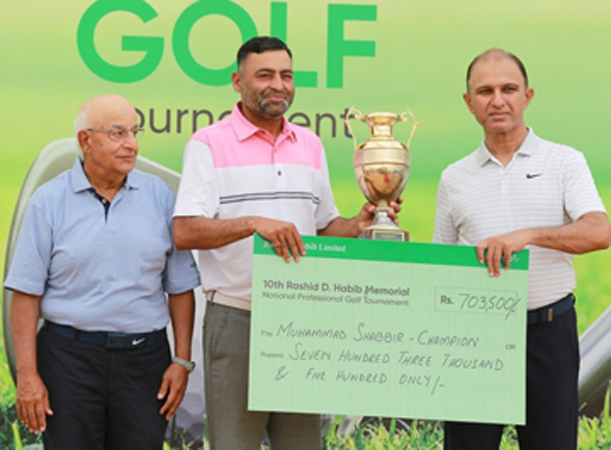 KARACHI: Pakistan’s top golfer Shabbir Iqbal claimed the title of Bank Al Habib’s 10th Rashid D Habib Memorial National Professional Golf Tournament 2021 at Karachi Golf Club on Sunday. Shabbir, who took the lead in the second round, maintained it to end the final round with 13-under-par (275) and win the title back after two seasons. He scored one-under-par (71) in the opening round, five-under (67) in round two, six-under-par (66) in round three and one-under (71) in the final round to claim the winner’s trophy and PKR703,500 as his share out of the total prize money of PKR7.9 million.

“It is great to regain the title after two seasons. Matloob is a great player but I had to stay focused to maintain the lead. I came back in the second round with a positive attitude and stayed focused in each and every stroke, chip and swing,” said Shabbir while talking to The Express Tribune. Defending champion Matloob Qureshi ended in a tie for fifth spot with five-under-par (283), along with Taimoor Khan, to individually bag PKR185,255 as prize money. “It was a good game. I had a bad day in round two where I scored four-over-par (76). Although I scored eight-under (64) in the third round, I wasn’t able to claim the top spot. Staying consistent from the start is the key to win,” said Matloob.

Following Shabbir was the young Ahmed Baig with 10-under-par (278) in second place while Muhammad Ashfaq captured third position with eight-under-par (280). “It feels really good to finish with the top and experienced golfers like Shabbir, Munir and Matloob. I have put in my everything into golf. I train, exercise and watch these seniors play to understand what to do in different situations,” said Ahmed, as the season came to a close. In the senior professional category, Tahir Naseem and Irfan Mehmood tied with the score of 144 and Iftikhar Ahmed captured third position with 145. In the junior professional category, Abdul Wadood won with 147, followed by Muhammad Saqib and Akash at second and third spot respectively.