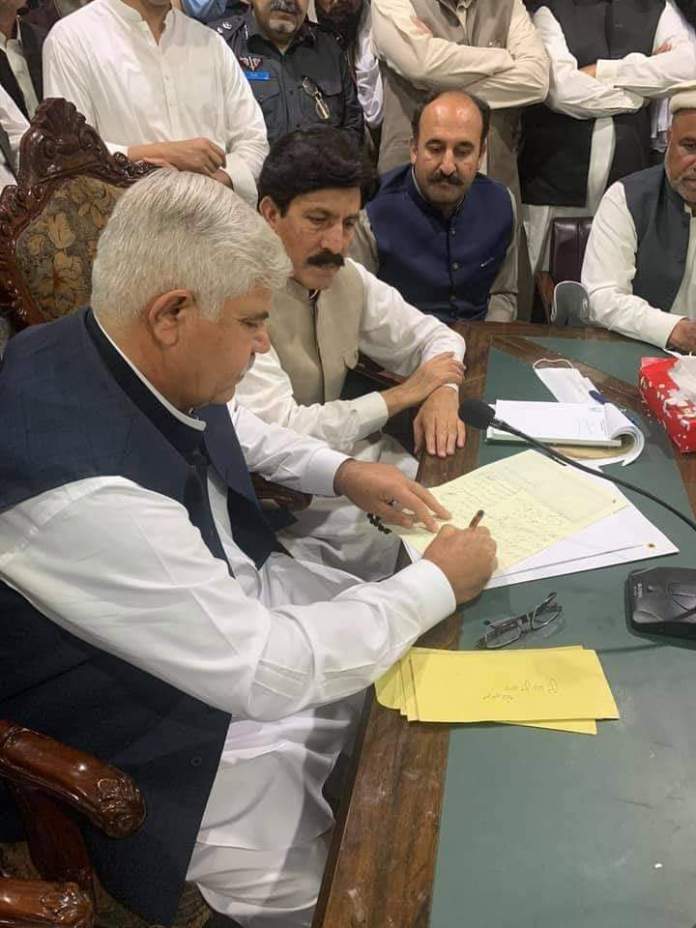 ISLAMABAD: The government and Bannu’s Jani Khel tribe on Monday concluded an agreement where the latter accepted to end the protest and sit-in with immediate effect.

The agreement signing ceremony was held at the Commissioner Office, Bannu, where Chief Minister Khyber Pukhtunkhwa Mahmood Khan presided over the proceedings and counter-signed the agreement inked by Joint Qaumi (Afridi, Orakzai and Marwat) Jirga and elders of Jani Khel tribe, according to the information available with APP.

The Chief Minister on the occasion distributed compensation cheques worth Rs 2.5 million to the four bereaved families.

The tribe was protesting against the killing of four youth and demanding the arrest of the culprits. They had announced a march towards Islamabad. However, the KP government entered into an agreement in Bannu, where the protesters stayed overnight.

According to the Agreement, the government will hold a transparent inquiry into the incident and punish perpetrators responsible for the killing.

Kamran Bangash, Special Assistant to the Chief Minister for Information and Higher Education said the breakthrough came in the wee hours of Monday after accepting demands of Janikhel peace jirga by Chief Minister Mahmood Khan.

A Shuhada (martyrs) compensation package will be given to families of the four deceased. The government will introduce a Special development package for Jani Khel.

The government will ensure peace in Jani Khel by clearing all armed groups in the area, while the locals will be allowed possession of weapons with license and their houses will not be demolished.

Within three months, the government will carry out a review of already apprehended individuals of the Jani Khel tribe and the innocent will be released immediately.

However, the cases of those found guilty will be dealt with as per State law.

The locals of Jani Khel will be given access to government officials for addressing their other problems.