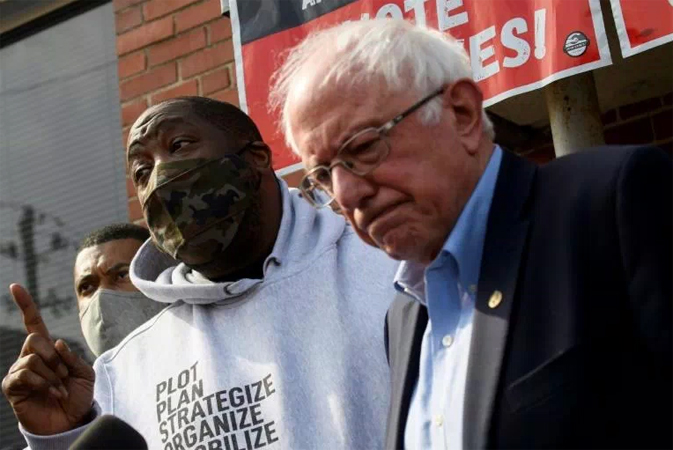 Poor and conservative, the state of Alabama seemed like the perfect place for companies to do business without having to deal with labor unions.

That is, until a handful of Amazon employees stood up to the world’s richest person and demanded representation at the bargaining table.

It comes to a head this week: Monday is the deadline for employees at an Amazon warehouse in Alabama to vote on establishing the first union on US soil at the massive tech company.

The case is being closely watched because it could pave the way for further unionization in the United States at one of the world’s most powerful companies.

Bernie Sanders, the independent senator and progressive darling, said here Friday during a visit to endorse the unionization drive that he was very encouraged by it.

“This is historically a very anti-union state. That’s why I am incredibly moved and impressed by courage of these workers,” Sanders said Friday outside the regional headquarters of the Retail, Wholesale and Department Store Union.

It would represent the 5,800 workers at the Amazon warehouse in nearby Bessemer if the employees vote to unionize.

The rapper Killer Mike, who also paid a visit to support the Amazon workers, noted that the Reverend Martin Luther King held his first civil rights rallies not in Atlanta, the city he is most associated with, but in Birmingham, the capital of Alabama.

“This is very much a tradition of Alabamians, to be organizing on behalf of the larger population,” the rapper said.

The RWDSU union took part in civil rights marches along with King in the 1960s and with John Lewis, another icon of that movement, in Selma, Alabama.

In the 1920s and 30s Alabama did see strong bursts of pro-union sentiment, mainly in steel factories around Bessemer, said historian Michael Innis-Jimenez.

But otherwise “the reputation of Alabama being anti-union is pretty well deserved,” said Innis-Jimenez of the University of Alabama.

“We have the only Mercedes plant in the world that is not unionized and that’s in Tuscaloosa,” he added. In Alabama, management can fire a worker without even having to give a reason, he said.

Historically, industries in the northeast moved to the south because labor here is cheaper and workers were easier to fire and less likely to unionize, he said.

Amazon opened the Bessemer facility a year ago for the same reason it set up others around the country: to meet red hot demand for Amazon’s online retail services.

But Amazon never expected 3,000 workers at the plant to sign an agreement in principle with the RWDSU to form a union.

Two factors set this case apart from, say, the non-union Mercedes plant: a union with roots here, one which took part in the civil rights movement, and workers who are mainly African American.

One of them, Darryl Richardson contacted the union late last year. He was sick of living in fear of being fired for nothing, of work breaks that were too short, of a frenetic pace on the job and what he called an overall lack of respect for workers.

“I know what the union can bring,” said 51-year-old Richardson, who has four kids. He has worked doggedly to convince colleagues to vote for the union in the interest of job security and other benefits.

Richardson said he used to work for a company that was a Mercedes subcontractor and went from making $12.50 to $23.50 an hour in the space of a few years. “And that’s the union,” he said.

Amazon pays the Bessemer workers at least $15 an hour, which is double the minimum wage in Alabama. At the start of the pandemic it also paid its people an extra $2 an hour in hazard pay but withdrew this perk three months later.

That decision was among the factors that triggered the pro-union movement at the warehouse, said Joshua Brewer, president of the local branch of the union, as was the feeling that the workers were not properly protected against the coronavirus. “Generally when you have a company like Amazon, that was coming to Bessemer to bring this new advanced facility with all these great jobs, you don’t really see that kind of problem. But within four months, workers had had enough,” said Brewer.

In response to employee complaints carried in the press, Amazon touted what it called the high rates of pay at the warehouse and perks such as health insurance from day one of employment.

These kinds of arguments worked well with younger workers who are less familiar with the world of labor unions. But the mood that has taken root at Bessemer is now galvanizing Amazon workers elsewhere in the US, the union and local elected officials say.