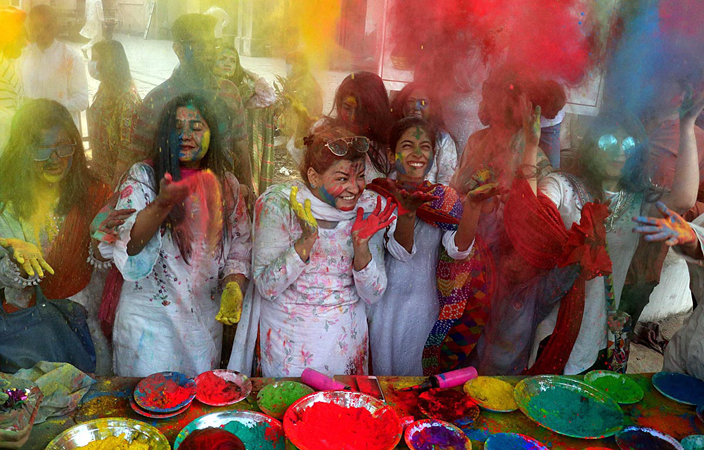 President Dr Arif Alvi, Prime Minister Imran Khan and others have wished all the Hindu community a very happy Holi, the festival of colours.

In a tweet, the Prime Minister wrote, “Wishing all our Hindu community a very happy Holi, the festival of colours.”

Foreign Minister Shah Mahmood Qureshi has wished the Hindu community in Pakistan and across the world a very happy Holi. In a tweet on Sunday, he prayed that the festival of colours might bring peace and happiness.

“This festival of light and colours provides an opportunity to spread happiness,” Qaiser observed. He praised the Hindu community’s role in Pakistan’s uplift. Qaiser added that all minority communities have the right to openly celebrate their religious festivals in Pakistan.

He said that sharing each other’s joys will spread the message of brotherhood, love and peace. He said that all minorities in Pakistan have complete religious freedom and protection and they enjoy equal rights in Pakistan. The people of all religions including Muslims, Sikhs, Hindus, Christians and Parsis are citizens of this country.

He said that Hindu community of Pakistan has played a vital role in the progress and prosperity of the country. The Hindu community in Pakistan is respectable to us. He said that minorities have been included in the mainstream by providing them equal opportunities of progress and development. “We should spread the message of brotherhood, tolerance and peace by sharing each other’s joys and happiness,” he further said.

Holi is a Hindu spring festival, originating from the Indian subcontinent, that was celebrated predominantly in India and Nepal, but has now spread across other areas of Asia and parts of the Western world.

The festival is a celebration of the end of winter and the start of spring. Often also known as the ‘festival of colours’ or ‘festival of love’, celebrations start on the evening of the Purnima [full moon] that comes in the Hindu calendar month of ‘Phalguna,’ which is between the end of February and the middle of March.

The festival is split in two events that take place over two days.

The night before is the Holika Dahan [burning of demon holika], in which people wear new clothes, gather around a bonfire and celebrate the victory of good over evil.

The next day is known as Rangwali Holi, in which everyone gathers for the ‘party of colours’. They celebrate by throwing coloured powder on each other along with music and dance.

The Hindu religious festival of Holi has now become popular amongst non-Hindus as well. In many parts of South Asia and in the West, people enjoy the idea of a colour party and joyfully take part in the celebrations.