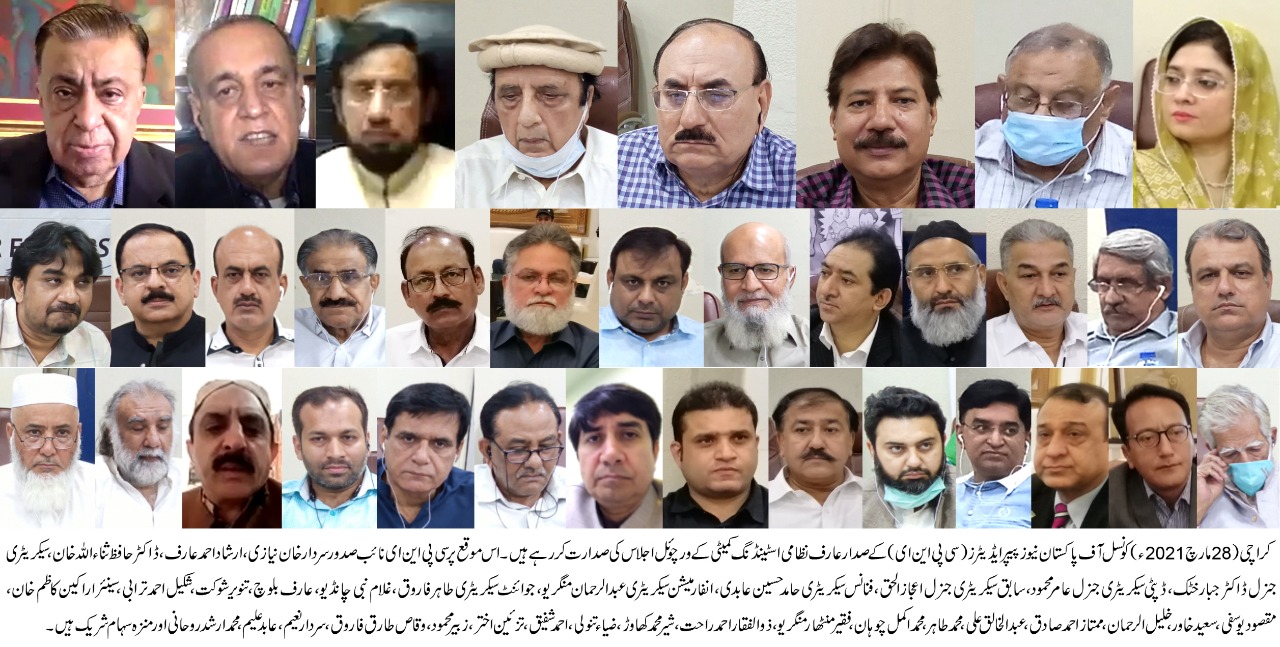 KARACHI: The Council of Pakistan Newspaper Editors (CPNE) expressing concern over the Pakistan Electronic Media Regulatory Authority (PEMRA) directive regarding reporting of the National Accountability Bureau (NAB) activities, has termed it as a transgression of the canons of press freedom and free speech.

CPNE asserted that PEMRA has, through this directive, barred the TV channel administrations from airing all analyses and comments regarding NAB activities in their current affairs programs and news bulletins.

CPNE declared the PEMRA directive a grave violation of Article 19 and sub-clause 19-A of the Constitution of the Islamic Republic of Pakistan that guarantees the common citizen’s inalienable right to information.

This stance was confirmed in a resolution adopted at a CPNE standing committee meeting chaired by the CPNE President, Mr. Arif Nizami. The virtual meeting was held through video-link in view of the continuing COVID-19 pandemic.

The meeting reviewed and discussed at length the on-ground situation regarding press freedom, the difficulties faced by the newspapers and the new payment system for advertisement adopted by the government through CPNE efforts.

Assuring fullest support to the new mechanism devised by the federal government as well as Sindh, Punjab and Pakhtun-Khawa governments, for the payment of outstanding to the media, satisfaction was expressed over the commencement of direct payments to newspapers.

CPNE Vice-President Sardar Khan Niazi said that certain ill-famed elements were actively involved in conspiracies against the agreed-upon system adopted at the instructions of the Prime Minister. He, however, hoped that the PM and the federal information minister would not let these conspiracies succeed.

The meeting resolved that if the new system for payments to newspapers for government advertisement is altered the CPNE will forcefully resist any such attempt. The opponents of the new media-friendly system of payments in fact wish to restore the previous corrupt practices whereby, since several decades, the billions of rupees from the public exchequer allocated for the media were rerouted to the coffers of the corrupt elements. These were the ill practices that created the acute financial crises for Pakistani media.

Discussing the Punjab media policy and Punjab Publications Bill 2020, Vice-President Irshad Ahmed Arif told the meeting that CPNE has forwarded its proposals to the provincial government and has recommended to the Punjab Information Department to frame solid and coordinated policy in this regard. Furthermore, he said, the Punjab government has also commenced directed payments to the newspapers.

On this occasion, Joint Secretary Tahir Farooq said that the Khyber-Pukhtunkhawa government has started direct payments under the new system and the provincial information department is also making payments to the newspapers. However, it is essential that payments should be made at a fixed date so that the newspaper establishment and the journalists should not face financial uncertainties.
He also demanded that the provincial KEPRA tax on KPK newspapers should be abolished as promised by the chief minister last year.

The standing committee, on the recommendations of the provincial committees, also approved a number of membership requests.