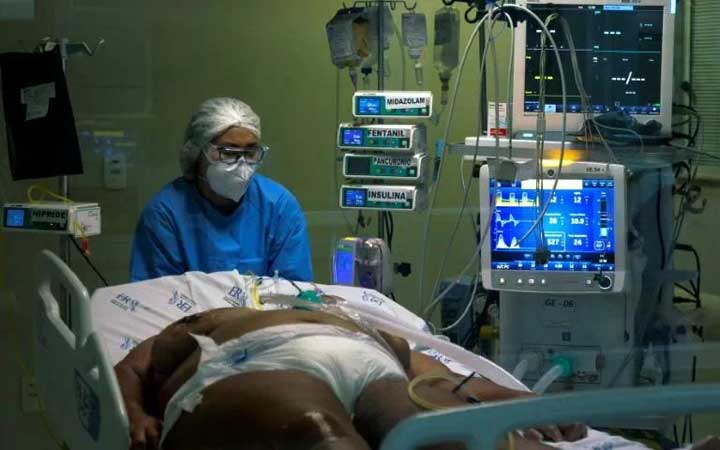 There are fewer wrinkles and less gray hair among patients in Brazil’s intensive care units as the country reels from a surge in Covid-19 that is increasingly hitting people under 60.

“We’re seeing a high prevalence of younger patients, with no pre-existing conditions, hospitalized with very severe cases,” Sztajnbok, head of intensive care at Emilio Ribas Hospital, told AFP. “The same trend is being reported at ICUs across Brazil.”

In Brazil, like most of the world, severe cases and deaths from Covid-19 were mainly among the elderly during the first wave of the novel coronavirus last year.

Now, the country is dealing with a devastating resurgence of the virus, blamed partly on the emergence of a new strain known as “P1” or the “Brazil variant.”

The recent surge has pushed hospitals across Brazil close to the breaking point, as the country’s death toll has soared to 285,000 — second only to the United States. This time, the demographic profile of the victims is increasingly young.

Before the trend emerged last December, the 30- to 59-year-old age group represented 20 percent of Covid-19 deaths in Brazil.

In about three months, that figure increased to 27 percent, according to health ministry data.

Meanwhile, the share of the death toll for over-60s fell from 78 percent to 71 percent. “Half the (Covid-19) patients hospitalized in our nursing wards are under 60,” said Luiz Carlos Pereira Junior, the director of Emilio Ribas.

A year ago, at the start of the first wave in Brazil, that figure was 35 percent, he said.

Health experts say part of the issue is that young people are following social distancing and masking recommendations less than the elderly. In a country whose president, far-right leader Jair Bolsonaro, has railed against stay-at-home measures and face masks, many people have continued with life as usual despite the pandemic, especially the young.

It is common to see packed subways and buses, streets crowded with mask-less pedestrians and police raids to break up illegal parties and clandestine bars.

“Last year, I think the fear of an unknown disease had such an impact on people that they listened to experts’ recommendations. But they aren’t anymore,” said Sztajnbok.

“Young people have lost their fear.”

Even as the young expose themselves more to the virus, the elderly are starting to benefit from the protection of vaccines.

“Some states have already finished vaccinating over-75s,” said epidemiologist Walter Ramalho of the University of Brasilia.

“And the elderly generally stay home more than the young,” he told news site Poder 360.

Public health institute Fiocruz warned this week that the country of 212 million people is facing “the worst health care and hospital collapse” in its history.