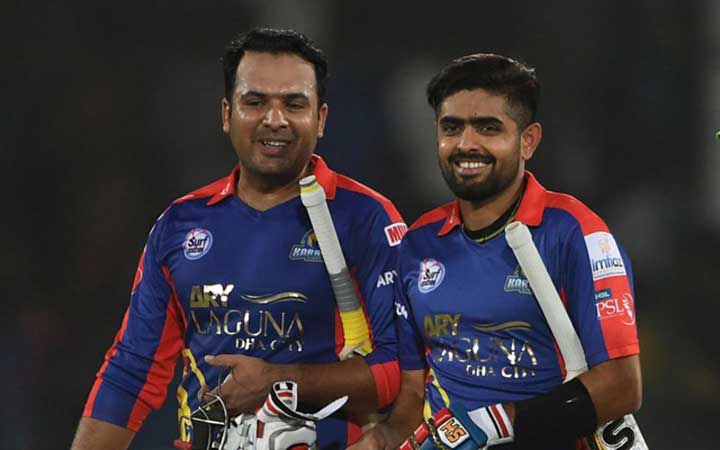 LAHORE: Pakistan skipper Babar Azam has come out in support of his teammate Sharjeel Khan, saying that despite fitness issues opener Sharjeel is a match winner who can turn tables on his opponents. In a virtual press conference here on Friday, ahead of the national team’s training camp for the South Africa and Zimbabwe tour, Babar assured that Sharjeel was working on his fitness, adding that the management was also working with him on the issue. “He can’t be Shadab Khan at once but still you need to carry him,” Babar said. “I agree his fitness isn’t great but we will bring him up to the mark. His form right now can help us and he is one of the best openers. I have played with him in Karachi Kings and he can take away the pressure and totally change the game. We are working on his fitness and you will see a difference. I never asked for him in ODIs but for T20 cricket, which is a short format, you can adjust.” Sharjeel returned to the domestic circuit last year after serving a 24-month ban for his role in the PSL spot-fixing scandal of 2017. His selection to the T20I side for the tour of Africa –– South Africa and Zimbabwe ––– was largely based on his form in the PSL, though, which included a century against Islamabad United. He was the third-highest scorer in this year’s unfinished PSL, behind Mohammad Rizwan and Babar, but at a booming strike rate of 170.94, which was well ahead of the other two.

While Sharjeel’ bulk has come for scrutiny, chief selector Mohammad Wasim has said on record that Pakistan was altering the benchmarks for fitness, making it less stringent to make room for skillful players. Sharjeel was a promising talent for Pakistan before his ban. He played 25 ODIs, 15 T20Is, and one Test and in that time built a reputation for being a hard-hitting batsman. But Pakistan did well without him when he was absent too, soaring to the top spot in T20I cricket, though they have slipped from there since. The change of heart on fitness marked something of a U-turn from the PCB, as earlier head coach Misbahul Haq and chief executive Wasim Khan were less open to selecting players whose fitness was wanting. Azam, the Pakistan captain in all three formats, is less ideologically inflexible on fitness, and is open to bringing in players who provide value in other ways.

“I don’t know why there is an impression that his fitness isn’t good enough,” Babar said when asked specifically about Sharjeel, and his fielding. “He played four-day cricket, a one-day tournament, and the PSL as well so I don’t think there is an issue. He is a match-winner and we are focusing on his fitness as well. In fielding he is great and there isn’t an issue so he is very much part of the squad and we have to back him for the good.” Babar wasn’t happy with certain aspects of selection and he confirmed there were differences with the chief selector. “I think if these things remain in the meeting room that should be good,” he said. “When there are debates, they are good for the team. Agreement and disagreement are natural processes it happens when we talk. But we have to keep it in the room. This isn’t my team, it’s our team. I understand the selection protocols and my role is to play the best possible XI and utilise the players we have.” Pakistan play three ODIs and four T20Is against South Africa before moving to Zimbabwe, where they are scheduled to play two Test matches and three T20Is.