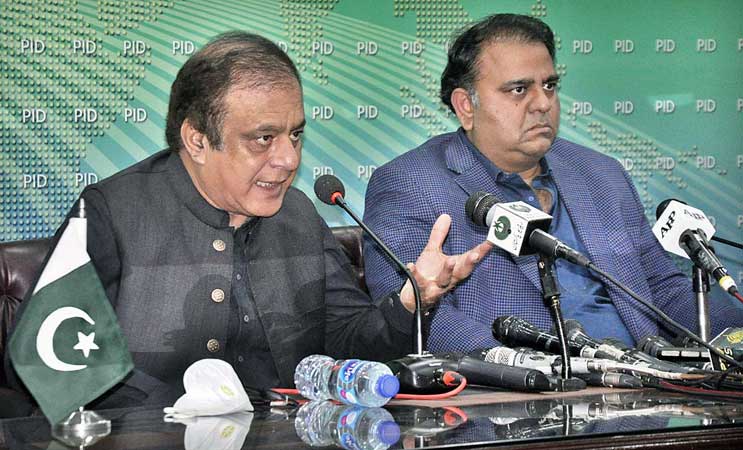 Federal Minister for Information and Broadcasting Senator Shibli Faraz has said that the country’s economy is getting stable and all the business activities are underway despite Covid-19.

Addressing a press conference along with Minister for Science and Technology Fawad Chaudhry on Sunday, the information minister said that all the economic indicators are on the positive trajectory.

He stressed the need for adopting precautionary measures to control the current upsurge of the pandemic. He said the process of corona vaccination is in progress on merit in Punjab.

“The entire world is seeing an intensification of the infections again. In Pakistan, vaccinations are underway, and following the health workers, the elderly are now being administered the vaccine,” he said. He lauded the “tremendous inoculation drive in Punjab,” saying, “I would urge other provinces to also follow suit.”

He said that the Pakistan Democratic Movement (PDM) has failed in its politics and faced humiliation in both the Senate chairman and deputy chairman election as well as the Premier’s vote of confidence. Referring to the opposition as “political orphans”, the information minister added that their anti-government campaign has run aground.

Speaking on the occasion, the minister for science and technology said that Pakistan Tehreek-e-Insaf has two narratives; one is accountability and the second is transparency in the elections, adding both are in the best interest of the country. He said giving statements against the country due to failure in the elections is condemnable.

Chaudhry said, “Nawaz Sharif should return Pakistan’s money to avoid jail.” He claimed that Maryam Nawaz wants to leave for London but that the government is not going to let her go.

Referring to the Muttahida Qaumi Movement’s (MQM) founder Altaf Hussain – residing in London on political asylum since early 90s – the minister added that, “Neither the MQM founder nor Nawaz Sharif can return from London.”

“Those who want to follow Altaf Hussain’s path should remember the end of his journey too,” Chaudhry warned.

Moreover, in reference to Pakistan Muslim League-Nawaz (PML-N) leader Javed Latif’s comments made during a talk show, the minister said that, “We are not here to label others traitors; defeat or victory are part of the electoral process, but that does not mean that one should start talking against the state.”

“Whatever Javed Latif was made to say has caused anger among the masses,” he maintained. The minister advised the opposition to choose “wise and experienced people” for their top slots. “Maryam and Bilawal do not have the experience [to lead the positions they are holding].”

The opposition, he noted, did not have any principles to stand on. “First they said they believed in open voting when signing the Charter of Democracy, then they chose to oppose the same [electoral reform],” he observed.