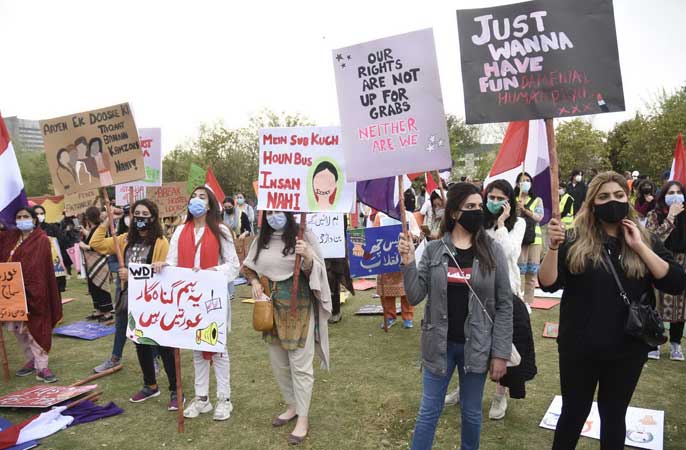 Women, men and allies in all major Pakistani cities took part in Aurat March events held to mark the day and call for the protection of women’s rights.

The first Aurat March was held in 2018 in Karachi. The next year, it was extended to more cities, including Lahore, Multan, Faisalabad, Larkana, and Hyderabad. This year too, the marches were held in Karachi, Lahore, Islamabad, and other cities.

In Karachi, the march took place at Frere Hall. In view of the prevailing coronavirus situation, organisers emphasised standard operating procedures (SOPs), including wearing masks and maintaining a distance of six feet. Strict security arrangements have been put in place at the venue, with walkthrough gates installed at the entrance, where attendants are being checked before being allowed to enter. The march itself has attracted a sizeable crowd, comprising people from all ages and walks of life.

Qurrat Mirza, one of the organisers of the march, took the stage and reminded the crowd why they were here. “In 2018, we held the first march,” she said. “Four years later, we have the same demands, which is why we are going to do a symbolic sit-in.”

She added that the organisers had a 15-point manifesto for the government, which it must implement. “If we don’t see action on our demands in the next one month, we will devise a course of action in the next three months,” she said, adding that they would do a sit-in every day if they had to. “Because it is not acceptable to me that someone rapes my daughter and her body is found in a garbage dump.”

In Lahore, the Aurat March started from the Lahore Press Club and reached its destination outside the Punjab Assembly building. The Aurat March Lahore organisers also laid out a “#MeToo blanket” on which women shared their experiences of sexual violence and abuse. Participants of the march also displayed women’s clothes with words written on them – termed “stains of patriarchy” – that reflected their experiences with patriarchy and the abuse suffered by them. The clothes were hung on wires across streets and walls. “These are real stories of violence, but also an act of resistance because we no longer carry the shame associated with these acts. The same is now society’s,” a tweet by Aurat March Lahore said.

The march in Islamabad started from the National Press Club and reached D-Chowk. The participants of the event raised slogans about reclaiming public spaces for women.

Each chapter of the Aurat March has its own manifesto with the Karachi chapter focusing on patriarchal violence; Lahore on addressing healthcare workers and women’s health; and the Islamabad march is dedicated to the crisis of care.