Chaudhrys say ‘no’ to Bilawal

* Shujaat, Elahi say they are committed to support government candidate in upcoming election for Senate top slot
* Bilawal says lessons have been learnt from Sanjrani's victory in 2019 no-confidence move
* Hamza says PDM has accepted Gilani as joint candidate 'from the heart' 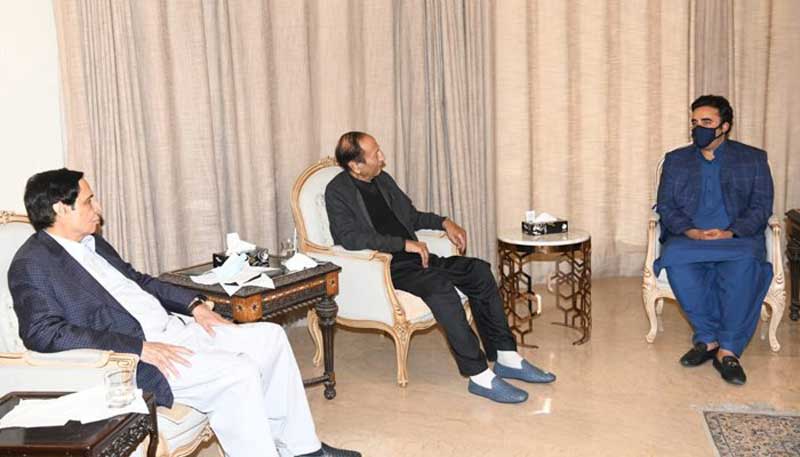 “We are government allies and have already assured our support to the PTI-led government candidate Sadiq Sanjrani,” the PML-Q leadership informed PPP Chairman Bilawal Bhutto Zardari who visited their residence in Gulberg on Sunday.

Bilawal Bhutto Zardari, along with Yousaf Raza Gillani, Chaudhry Manzoor, Hassan Murtaza and Qamar Zaman Kaira called on Chaudhry Shujaat Hussain and Chaudhry Pervaiz Elahi to muster support for the PPP candidate. He also inquired about Chaudhry Shujaat Hussain’s health on behalf of former president Asif Ali Zardari and conveyed his good wishes. In a statement issued by the PML-Q Media Cell, the Chaudhrys said they hail Bilawal Bhutto Zardari’s visit, adding that their party was committed to support the government candidate in the upcoming Senate election. “We stand by Prime Minister Imran Khan-led government in the Senate election as a matter of principle,” Chaudhry Shujaat Hussain told Bilawal Bhutto. “We don’t back out of our promises and it is against our principles to break a solemn commitment,” Chaudhry Pervaiz Elahi said.

Bilawal also called on PML-N leader Hamza Shehbaz at the latter’s Model Town residence in Lahore. During their meeting, the two exchanged views on the existing political situation, while Bilawal congratulated Hamza, the opposition leader in the Punjab Assembly, on the victory of PDM candidate Yousuf Raza Gilani in the March 3 Senate elections.

Speaking to reporters after the meeting, Bilawal expressed optimism that the candidate fielded by the PDM for the Senate chairperson election will emerge victorious because the opposition parties will together challenge the PTI-led ruling coalition. Asked how the PDM would ensure its senators vote for the opposition candidate and not defect as had happened during the vote on a no-confidence motion moved by the opposition against Senate Chairman Sadiq Sanjrani in 2019, Bilawal said lessons had been learnt from the past. “We have learnt quite a bit from the last [Senate] chairman election; if we hadn’t, we would have lost the National Assembly secret ballot election,” he said, referring to Gilani’s victory on the coveted Senate seat from Islamabad. “We won there and it is our full effort that we challenge [the government] together so the win is of the PDM.”

Elaborating, Bilawal said contacts were being made with the senators elected in the March 3 polls to request them to vote for Gilani in the Senate chairman election. He added that Gilani himself had already requested most of the senators to vote for him. Hamza, who was released from jail on bail last month, in his remarks said the objectives of the PDM weren’t limited to a long march or a no-confidence motion in the short term. Instead, he said, it aimed to correct “the destruction caused in this country in these [past] three years”. He said the people of Punjab faced issues such as a shortage of medicines or mounds of trash lying on roads, while crop production of cotton, wheat and sugarcane was either at its lowest point or had significantly reduced.